Edward Snowden is some kind of genius. By dribbling out his profoundly important revelations, he has maintained focus on the extensive US spy activities over a space of time long enough that the world is actually paying attention. Sure, the massive Wikileaks dumps also gained attention, but the fickle press soon lost interest. These days, we anxiously await the next juicy leak. As fast as the press puts Snowden leaks on the shelf, new ones pop out demanding attention. 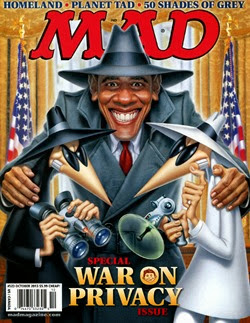 The antics of our government have even entered the common parlance of daily cartoon strips and “your momma” jokes.

(The pull-quote above is from Your Mom, a post on the intriguing Me: (Tries to Work) blog by the same author as the invaluable ResearchBuzz, which I’ve subscribed to since 1998.)

For whatever reason, ordinary citizens have yet to march on Washington to demand an end to the tapping of their phones and the recording of their every action on the Internet (though see below, one is scheduled for Saturday), but when Snowden’s leaks pointed out that the surveillance extended to the leaders of Germany, France, Mexico (and most recently, at least 35 national leaders), those leaders made some noise. Before, they didn’t seem terribly upset (most likely, their spy agencies were also spying, or benefitted from NSA cooperation or both). Now they had to be upset in public:

The French and German governments have demanded talks with the US by the end of the year as the row over the spying activities of the US National Security Agency intensified following the revelation that Angela Merkel’s phone was monitored. The EU issued a joint statement raising “deep concerns” over the surveillance scandals.

Check out the above article—at least one part of it is very funny. This snip is from near the top of the article:

Julian Smith, the MP for Skipton and Ripon, raised concerns about the Guardian's coverage of the US National Security Agency files, leaked by whistleblower Edward Snowden, in a House of Commons debate on Tuesday. He wrongly claimed it had distributed information about British intelligence agents and called for the Guardian to be prosecuted.

"To communicate, not just publish, any identifying information about GCHQ personnel is a terrorist offence," he told MPs.

However, on his website, he has publicly identified staff from the high-security US base, publishing a picture of himself posing with more than 30 people outside the House of Commons. The caption reads: "Julian has welcomed a group of around 40 people from RAF Menwith Hill to Westminster". The picture also appears on Smith's Facebook page where it states: "Enjoyed meeting members of the British-American group from RAF Menwith Hill".

One more snip and then I hope you will click over to view the complete article, which is constantly updated (the Guardian also has a handy Android app you can install).

Democracy Now continues to track the Snowden leaks and the world’s reaction to them. The following snip (under terms of their Creative Commons license) is from today’s program headlines:

Germany and France are demanding a "no-spying" agreement with the United States following new revelations of National Security Agency espionage. Leaks from Edward Snowden this week show the NSA tapped into the cellphone of German Chancellor Angela Merkel and collected French phone records in bulk. News of the spying dominated the first day of a European Council summit in Brussels, with European leaders uniting in outrage. Appearing with Merkel, French President François Hollande said France and Germany will seek an agreement with the United States before the end of the year on ending the spying.

French President François Hollande: "France and Germany will take an initiative. We will start discussing the matter with the Americans in order to agree upon a common framework, that will be done by the end of the year, and the other Europeans who would like to join us will be welcome. To be more specific, we will make sure that between the various services we can not only clarify what happened in the past, but we can agree upon rules for the future."

In the latest of Edward Snowden’s revelations, The Guardian newspaper reports the United States has monitored the phone calls of at least 35 world leaders. Staffers at the White House, State Department and the Pentagon were all encouraged to share the contact information of foreign politicians. One government official handed over 200 phone numbers. In Washington, White House Press Secretary Jay Carney refused to comment on the report, repeating his vow that the United States is no longer spying on German Chancellor Angela Merkel.

White House Press Secretary Jay Carney: "We are not going to comment publicly on every specified alleged intelligence activity, and as a matter of policy, we have made clear that the United States gathers foreign intelligence of the type gathered by all nations. As I mentioned yesterday, the president spoke with Chancellor Merkel, reassured her that the United States is not and will not monitor the chancellor’s communications."

The identities of the 35 leaders targeted by the NSA have not been disclosed. According to a leaked government memo, the spying produced "little reportable intelligence."

As the diplomatic uproar over National Security Agency spying continues overseas, activists in the United States are holding a protest on Saturday in Washington, D.C. "Stop Watching Us: Rally Against Mass Surveillance" is organized by a coalition of more than 100 groups, companies and public figures. In a statement, Edward Snowden urged supporters to attend, saying: "Today, no telephone in America makes a call without leaving a record with the NSA. Today, no internet transaction enters or leaves America without passing through the NSA’s hands. Our representatives in Congress tell us this is not surveillance. They’re wrong ... Join us in sending the message: Stop watching us."

Will any of this stop the NSA spying? I’m doubtful. Germany, France and the EU will get their “no spying pledge” and the US will redouble efforts to keep its secret activities from being revealed in the future. Obama lied before, he can be counted on to lie again. Clapper is still a free man despite lying to Congress. Congress doesn’t seem troubled by the spying very much at all.

As I’ve said before, we’ll know that they’ve quit spying only when we see a gazillion hard drives suddenly offered for sale on eBay.

Come on, man, we're exceptional. We can do this stuff anytime we want.