“A strange thing happens when you turn on the news in Hawaii. Tune into the 10pm local newscast on KGMB, the Aloha State’s CBS affiliate, then switch to its supposed NBC competitor, KHNL. Then go back and forth again. You will see the same stories, the same footage, the same broadcasts from beginning to end. Every weekday, for three hours, the two stations simulcast the news. A third station, KFVE, is also not much of a rival, airing 11 hours of news each week that is produced by the same Honolulu newsroom as KHNL and KGMB. Three of the five stations that deliver daily TV news in Hawaii have been joined into a single news operation.”

Yeah, we know. The fight to prevent the de-facto consolidation of KGMB, KHNL and KFVE that started in 2009 has been lost. There’s little hope that an unsympathetic Obama administration will revisit the issue any time soon, according to an article in the latest Columbia Journalism Review which just arrived in my mailbox:

The article reviews the situation but omits details or a narrative of the struggle. For that, you’re stuck with Googling or this list of related stories on Disappeared News. 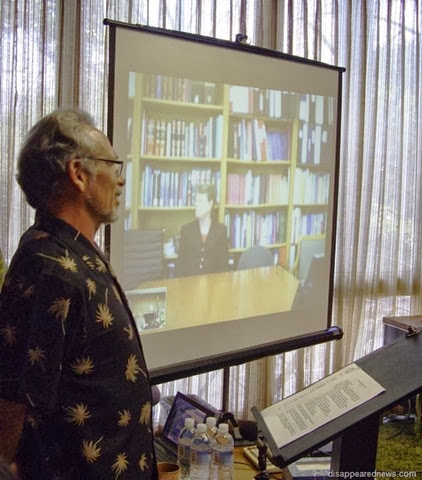 (At left is Chris Conybeare, president of Media Council Hawaii, and on the screen is Angela J. Campbell, attorney at Georgetown University Law Center, counsel for Media Council Hawaii for the complaint filed with the FCC.)
As the CJR article notes, the FCC has specifically avoided tracking or studying the impact of joint services agreements such as bind the three Honolulu stations together. It does note that the arrangement resulted in the loss of 68 jobs according to a University of Delaware study.

In the end, not only media advocates but the viewing public lost the battle, as the pull-quote demonstrates. Hawaii still has a media council, formerly the Honolulu Community Media Council (HCMC) and one of only five media councils left in the United States. The HCMC was founded in 1970, and although apparently dormant at present, would be certain to spring back to life if an opportunity to reverse the de-facto media consolidation opened up (it’s “de-facto” because  no broadcast license actually changed hands).

[Disclosure: I am a past secretary of the HCMC and filed complaints with the FCC against the three stations for public file violations. The FCC incorrectly rolled the complaint into the Media Council action (I was not then a member of the Media Council) and ultimately levied a fine of $10,000 for the violations.]