Catch the Daily Show if you can tonight on TV or on the web tomorrow.

Honest, I don’t know how Jon Stewart can tackle a tragedy like the Navy Yard shooting in a comedy show setting, but he succeeded in saying what every Congressperson needs to hear. I couldn’t laugh and was surprised that the audience could, but well, it is a comedy show. 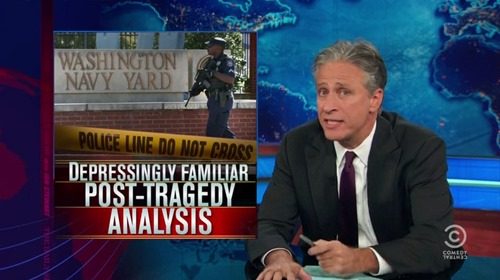 There’s the cognitive dissonance. Is it comedy that the shooter was able to pass a background check despite a troubling history that Stewart detailed?

If the definition of a mass shooting is four or more people killed, then… 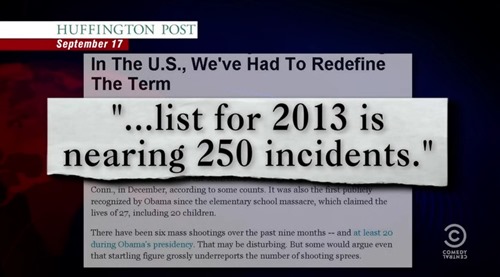 Here Stewart points out that there have been 250 incidents but only 260 days so far in the year, so we’re batting .96 – almost one mass shooting each day of the year, on average. 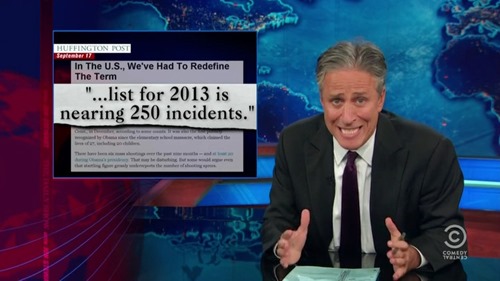 During the interview segment of the program Stewart briefly revisits the gun control issue discussing how even a conservative Australian government not only passed gun control, but ran a successful buy-back program that produced real results for them.

Is it funny that NRA-bought-and-paid-for Congresspeople are still blocking any sensible gun control in this country? What does it say that they are repeatedly returned to office by their constituents?

It’s sad that one of the best dissections of the incident on TV needs to take place in a comedy setting, but good thing it did. Jon Stewart has a large following. Of course, he is really preaching to the choir, but you know, that’s important to do sometimes.