“With more than 6,000 downloads The Liberator v1.1 is the most popular, followed by other [plastic] gun designs, the FOSSCAD Atlas SSR and DMR Shanrilivan with over 5,000 downloads.”

There are so many guns out there already that gun control, even if Congress cared about the killings, won’t slow the carnage. And the first generation of make-one-yourself plastic guns may be on the way.

To Congress, the mounting number of mass killings in this country seems to be of little or no concern. Heck, we’re the 99%, we’re expendable. If we kill ourselves, what do they care? Cynical perhaps, but then, just who has to be killed to get their attention? Even Gabrielle Giffords of Arizona, one of their own who was shot in the head, did not change the thinking on Capitol Hill.

She survived. They moved on.

Lately, the House has come out on the side of death by repeatedly trying to deny Americans the life-saving health insurance offered by the Affordable Care Act. Don’t expect much from these people.

What will it take to get their attention to sensible gun control laws? One can imagine some scenarios, none pleasant to contemplate.

In the meantime, life inside the Beltway continues without missing a beat. Instead of laws, we get rhetoric. 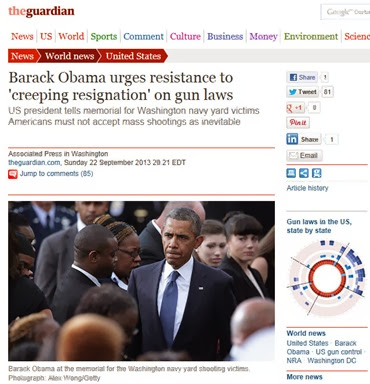 "Sometimes I fear there is a creeping resignation that these tragedies are just somehow the way it is, that this is somehow the new normal. We cannot accept this."

[Obama] said no other advanced nation endured the kind of gun violence seen in the United States, and blamed mass shootings on laws that fail "to keep guns out of the hands of criminals and dangerous people".

Perhaps the US is no longer one of the advanced nations. ??

Whether it's Britain, Japan or Australia, the evidence is the same: strict gun control means fewer people die. American unwillingness to face this basic arithmetic – preferring to blame the mental health system or videogames or the "feminisation" of the classroom, as one conservative pundit did, or the absence of religious prayer in schools – the explanation of former Republican presidential candidate Mike Huckabee – rather than the most obvious culprit for all this gun violence, namely easy access to military-grade assault weapons, can drive outsiders to distraction.

Australia is a nation of gun lovers, but after an event dubbed the Port Arthur massacre, it took control of the gun situation in 1996.

"The new law banned semiautomatic rifles and shotguns, assault weapons, and not only new sales … we banned importation sales, we banned ownership, so currently owned weapons were prohibited. The government bought those guns back at a rate of about the retail price plus about 10%. You couldn't get them repaired. You couldn't sell them. It was a very comprehensive ban.

"The buyback ended up buying back and destroying more than about 650,000 of these weapons, which is the largest buyback and destruction program for guns anywhere in the world."

The buyback is key to taking guns out of circulation. Even if Congress passed meaningful gun regulation, there are so many guns available in the US that practically speaking, anyone who wants one will be able to obtain one for generations into the future. Gun owners don’t let their weapons rust, so a gun held today could be around 50-100 years from now. Without a buyback, any limitation on sales, although better than nothing, will be insufficient.

The conversation needs to be expanded to include an Australia-style buyback program.

A new threat could further complicate the removal of guns from the population: the increasing availability of 3D printers has fueled a rash of plastic gun designs that cannot be controlled. Many designs would pass through metal detectors because they contain no metal to be detected.

There are no background checks on who may assemble or own a 3D printer, and the plastic they use is easily obtainable and affordable. The printer dutifully reproduces anything its told to make. 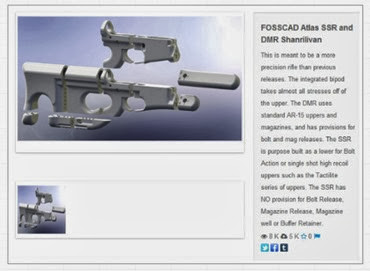 In a response Defense Distributed, the people behind the first 3D printable gun, threw up a website to host the designs that had been banned at Thingiverse. This included the popular blueprints of their own gun “The Liberator.”
…
DEFCAD raised a significant amount of funds and has now quietly rolled out the meta-search engine to the public on DEFCAD.com. While still labeled as an Alpha release the site already indexes more than 74,000 files, all stored on external sites.
…
For now, however, the most downloaded files on the new meta-search engine are, perhaps fittingly, guns. With more than 6,000 downloads The Liberator v1.1 is the most popular, followed by other gun designs, the FOSSCAD Atlas SSR and DMR Shanrilivan with over 5,000 downloads.

Many of these plastic guns will not work. They could blow up in the hands of their users, either through design or manufacturing defects. Others will likely succeed. While they’re not (yet) assault weapons, they will “democratize” gun ownership by taking it completely out of the realm of government regulation.

Just as we are unprepared, as a country, to control the number of guns in circulation, we appear to be unprepared for the birth of a cottage gun-making industry.

What’s the remedy? None is in sight. Enough of the American population supports gun ownership that do-nothing politicians are not likely to be voted out of office.

Mass killings have become the fodder of lazy news channels because they’re easy to report and very dramatic. They’re kind of like reality shows, with all the elements of surprise, drama, and tears afterwards.

Unfortunately, this kind of reality looks to have a long run.