The grass is greener in middle of the street 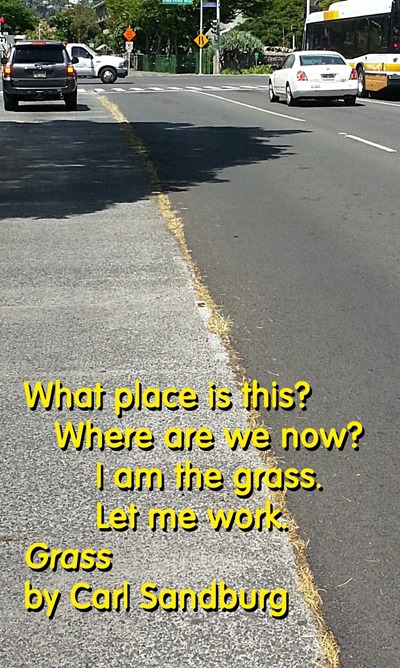 I should have gone out the other day, after it rained a bit. The grass was green. It was tall and fine, and cars were avoiding running over it.

If I can, I’ll get a better picture, but this one still illustrates my point.

Driving on that section of the Pali Highway a couple of days ago, I was impressed at the lush stand of green grass maybe six or eight inches tall (sorry about the pic above) growing, of all places, right between lanes on what is a heavily travelled road.

Even though the grass is temporarily brown, its roots are still strong, and they are doing their job on the roadway. After some rain, the green stalks will be back.

I was reminded to go back and snap this after returning from a drive out to Ewa Village. Ft. Weaver Road is very heavily used, and you’d think that it would be kept in good condition. You’d be wrong. For several sections, the white paint between lanes was totally absent, nor were there reflectors. Then there’d be a stretch with reflectors, then no more reflectors.

Along several stretches of the road there were long cracks between lanes where lane paving wasn’t properly sealed with older pavement. That’s pretty common, and related to the grass picture above. You’ll find the same situation on a street near you.

Just a couple of days earlier I turned right on Kapiolani Blvd. from Cooke St., I think, and noticed that there was no double yellow line on the street. I could imagine a car, especially in the rain, turning into an oncoming lane of traffic as a result of the city’s negligence. Yes, they’re doing construction there, but to go home and leave a street in an unsafe condition cannot be excused. Even if a contractor (and not the city) is doing the work, they can only get away with it because of lack of proper oversight.

The lead story in the July 2, 2013 Star-Advertiser reported on a study that was about as critical of the state’s road maintenance as one could get. Study or no study, I think we already knew how bad the roads are. I’ve written so much about it here that I hesitated to do so again.

Without being road engineers we can tell—from the potholes, missing paint, cracking surfaces, grass growing, dangerous reflecting surfaces, missing lane markers, and on and on… that things are not being done right by our city and state departments of transportation.

I’ve written about technology we don’t find here: permeable asphalt and concrete, noise barriers, and the use of rubber tires in the asphalt mix (said to reduce noise as well as make use of a waste product).

I wrote once about the bike lane down the center of Metcalf Street that was allowed to completely disappear—putting bicyclists’ lives at risk if they used what used to be their bike lane. I’ve posted images of how protected bike lanes are used elsewhere. That same article includes pictures of place where white paint is disappearing, and of an ineffective sign which could result in injury or death, yet nothing is done about it.

I’ve written how inhuman it is to require human sacrifice—a certain number of “incidents” before a traffic light is installed—where “incidents”=deaths.

Basically, our departments of transportation are not working well for us.

Will anything change as result of the publication of the new study?

Not likely, unless there is some demand.

My own demand starts with the replacement of leadership at the city and state departments. It doesn’t matter whether we are spending so much and getting so little as a result of ignorance of the technology or pathetically poor management of road installation and repair—the point is that other places do it right, and we do it wrong.

We can’t blame the poor execution on the Legislature’s raids on the special fund. What the DOT’s do, they do badly.

As usual, the money is snitched from our wallets and purses to fund a system which costs too much and delivers too little.

Unless taxpayers take action, the roads will not improve, and they’ll continue to take our money.