I wrote about the lane visibility problem on a section of the H-1 highway in Honolulu in a June 2012 article and included a picture I took (as a passenger) through the car windshield. It wasn’t a very clear picture though it illustrated the problem. When driving with sunlight ahead of the car, the visibility is not the best. The way the H-1 has been maintained greatly increases the problem for drivers.

The state has decided to leave construction markings unrepaired on the section of the H-1 past the 6th Ave. exit and has not improved the visibility of the inter-lane marking. So in the early morning, and particularly in the rain, it is hard to figure out how to stay properly in lane while driving.

In today’s Star-Advertiser there is a picture of the H-1 with a caption describing the vog situation that will prevail over Honolulu this entire week. The picture is also an excellent illustration of the highway marking hazard.

The picture is copyrighted, so I can only post a fair-use snip of it. If you have the paper, check out the half-page image on page B1. 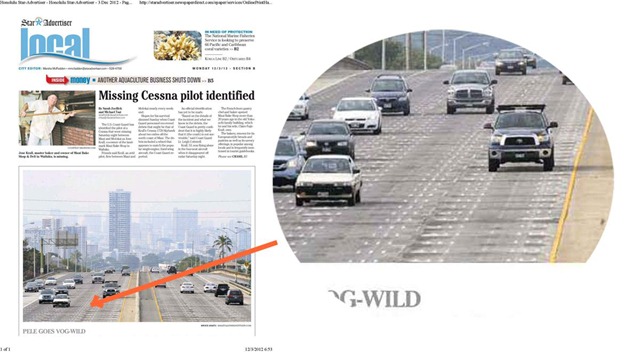 Notice that the areas where road surface irregularities have been ground off and left as-is are still, even though construction ceased months ago, as bright as the fading dashed line that separates the lanes. The reflectors that the state uses simply reflect their poor engineering choices—mostly they don’t reflect light. Particularly in a rain squall, the lane markings are hard to discern.

The driver in the white car may simply be changing lanes—or he could be confused by the hazardous condition of the road.