As expected, Judge J. Michael Seabright instructed the attorneys for (de)Occupy Honolulu and the City and County of Honolulu to draft the wording of an order that will address plaintiffs' as-applied challenge to the city’s stored property ordinance but does not address the constitutionality of that ordinance. The order will to hold the City to complying with the law and not disposing of or failing to return seized items. Other matters will be left to trial.

The order, expected to be completed and signed next week, is similar to the order currently in force that prevents the City from seizing and destroying property. An additional section will deal with procedures for reclaiming property from the City.

Based on assurances given by City attorney Ernest H. Nomura during the hearing, the City will not impose fees for reclaiming property even though the ordinance allows for a $200 charge to be made. Accordingly, the Court did not have to consider questions around due process or its constitutional basis in the Fourth Amendment. After the hearing, plaintiff attorney Richard L. Holcomb confirmed that if the City should begin to assess fees, he would bring that back to the Court. 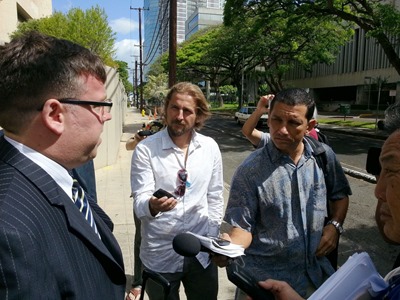 Attorney Richard L. Holcomb answers press questions outside of the federal courthouse in Honolulu after this morning’s hearing on the lawsuit brought by (de)Occupy Honolulu against the City and County of Honolulu. Plaintiff attorney Brian J. Brazier was also present but behind the cameras. 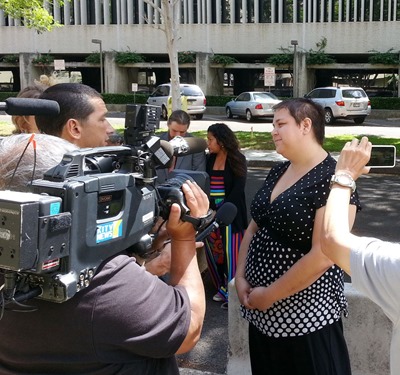 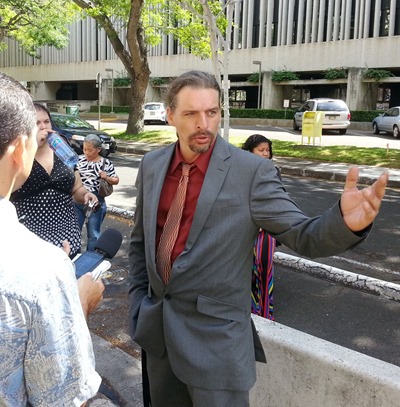 Mr. Holcomb confirmed that the Court was informed Wednesday that no fees would be imposed to retrieve seized items, so there won’t be a need to include that in the court order. I asked if the City’s attorney can bind the City Council to that, and he replied that if the City started imposing fees, plaintiffs would quickly be back in court. When asked about the fee included in Bill 7, Mr. Holcomb replied that they would be addressing Bill 7 at the appropriate time.

Attorney Brian J. Brazier confirmed that the court order will prevent the City from wheeling up a garbage truck and just dumping property into it.

Catherine Russell outlined some of the actions that (de)Occupy has been engaged in, including against Monsanto and for the homeless. Christopher Smith spoke in part about how the City would go through people’s belongings with bolt cutters in the process of destroying them.

The main problem with Chris “Nova” Smith and his band of (de)Occupy encampment is that their shifting message of protest left most in the community confused and upset. Were they part of Occupy Wall Street? A homeless advocacy group? Or are they, as Smith now claims, a part of the anti-GMO movement?

The answer is: all of the above. These guys are professional protestors who will continue to move from cause to cause — in order to justify their tent in the middle of the sidewalk. Grow up, and establish a 501(c)(4) group ... then confine your protest to Honolulu Hale and the state capitol where it belongs!