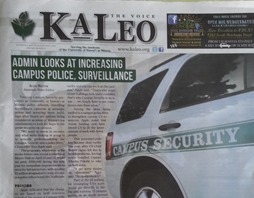 University of Hawaii interim President David McClain is pledging to increase security systemwide over the next two years to make the institution's 10 campuses "rape-free zones."

When I was a student there in the 1990’s, I commented to security about the deep darkness round Moore Hall. It was a wonder, I thought, that a reputable security department would leave such a large area unlit except by moonlight. But that’s the way it stayed. Thefts of mopeds and even cars from UH parking lots were nothing unusual even then.

Three mopeds and a car have been stolen on UH's Manoa campus in the last year and that's just from her family and boyfriend. Calah's moped was stolen Sunday.

I wrote a letter to the editor of Ka Leo ‘way back in those pre-internet days of the 1990’s when the newspaper published an article on the theft of mopeds. Why, I recall that I wrote, won’t the university install some CCTV cameras along with signs indicating that the parking lot in question was under video surveillance? As I recall, nothing was done. But fast forward to 2013, it may be that UH is discovering CCTV, even if a bit late:

Although he acknowledged that the use of cameras would likely raise complaints about civil liberties violations and other privacy issues, the chancellor maintained that such a tool is necessary as well as useful, citing cameras that were used to capture the recent bombings at the Boston Marathon.

I revisited abysmal UH security in a 2012 article, and have been posting variations of this photo since at least 2010. It’s a phone in parking lot C at Kapiolani 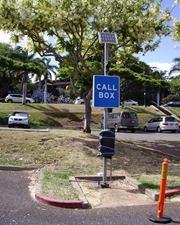 Community College (part of the UH system) which says “Call Box” but there has been no working phone in it (I haven’t checked in a couple of months). I wrote:

Imagine it’s late at night. A young female student parts from her friends and heads towards her car. She notices shadowy figures following her. So instead of going to the car, she heads instead for the emergency call box. That’s what it’s there for, right? To get help when you’re in trouble.

She breaks into a run and a cold sweat. They’re gaining on her.

That’s what could happen as a result of this bit of neglect, this emergency phone that never gets fixed

Security knows about this. Occasionally they come by the KCC Farmers Market in a little golf cart, and I’ve pointed it out.

Let me emphasize that if there were no callbox sign there, no one would run toward it only to discover that there’s no phone there. But KCC, part of the UH system, has left that sign showing the whole time. It could cost someone her life.

Long story short, if security is finally improved, great! On the other hand, I’m not holding my breath. Security, along with routine maintenance, has been badly neglected for so long… .