KITV: “The story behind the deOccupy Honolulu movement”

It’s good to see an interview in the mainstream press that gives the (de)Occupy protesters a chance to explain their campaign. Check out KITV’s interview posted on their website: The story behind the deOccupy Honolulu movement (KITV, 5/16/2013) (includes video). 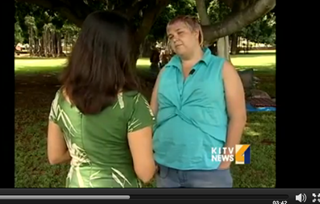 We asked deOccupy protester Cathy "Sugar" Russell why she lives on the streets in tents.

She responded, "I'd be doing this anyway.  I don't have a job.  I'm stuck living on the streets.  I just do it more publicly to give light to the crisis."

That crisis -- what Russell calls the "houseless issue."  The roughly two dozen deOccupy protesters have spent the last year and a half in and around Thomas Square to make the plight of the homeless more public.

I suspect that it has been the (de)Occupy encampment that has forced the city to (finally) begin to take seriously the need to provide assistance to those living outdoors instead of campaigning to punish them.

And no matter how many planters the city brings in, they're staying put.

Later in the video, (de)Occupier Christopher "Nova" Smith reported that he would rather live in his home, but he stays with the encampment because he “can't deal with seeing a government that's so willing to violate people's civil rights.”