As part of his new initiative on homelessness in Honolulu, Mayor Kirk Caldwell mentioned the city’s raids on homeless encampments in his State of the City address this morning (snip): 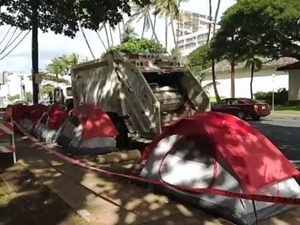 Let’s do some elementary math with that $15,000 estimate.

By now, the city has conducted approximately 60 raids on the Thomas Square sidewalks. Part of the property picked up was apparently seized and destroyed illegally, and the city is defending itself in a court case due to be heard next in federal court in May. We don’t know what the lawsuit will ultimately cost the city, but we can make use of that $15,000 figure at least:

The raids have been unsuccessful. The Stored Property Ordinance has not served its intended purpose, yet the city persists in spending taxpayer money at the rate (according to Mayor Caldwell) of $15,000 an attempt.

According to the Mayor’s address this morning, they have succeeded in wasting much of $900,000 that could have been invested, instead, in evidence-based solutions such as Housing First programs.

really the mayor should be a shamed of himself. Where do you expect these people to go?


The Mayor wanted to do right without really talking to the people on the ground level. Volunteers (me) and disability people should not be speaking as two groups. Volunteers do not have a stake in the cycle as much as disability. Checks such as: social security, welfare, and disability-veterans are ruining society! Those of us that are volunteers as well as in the work force see this as 'pilau' to the cause. Here me out! This US social checks are a phenomenon that needs to be broken into bits and pieces and thrown to the wolves. It's in bad spirit, so to speak, and makes whole societies sick. Native Hawaiians is a robust culture and we need to get rid of that culture of co-depended upon a USA handout! Hawaii in the 70's did not have poverty, we had poor, but not sick, starvation, and deranged people. We have them now and the numbers are growing because healthy people are opting for those checks! I experience mothers conditioning their children for special needs from pre-school when they are healthy children. I see young women in early-late pregnancy. I see the young and old waiting for the postman. Those USA checks are what's created a break down of society.

I have been homeless for five months and trust me this harrassment sucks!


I have been homeless for almost six months now and this type of harrassment suck...so these mayors can't stand homeless huh?? Well if that's the case offer some jobs that are vacant, their 50 states and no one is hiring? What nonsense! I can't help my situation, I got let go from my job, I want to pay my debts but can't and the worst part is I have been applying for jobs but people at the ie employer want to be so pickey because I'm less fortunate than others and don't have the appearance they prefer upon interview...umm sorry but I don't have money for clothes if a polo shirt and cargo pants ain't good enough then I don't know what to say what's the matter at least my friend will let me use his shower for bathing and washer and dryer for what little clothes i carry with me, that ain't good enough for these people? The employers need to stop being so pickey and hire people willing to work. I have to use public libraries for computer access and have to walk to these places just to apply for work just so these people can reject me anyway, it's the same crap over and over again "we'll call you" how!? I don't own a phone I have to use a friends phone and address. So the day that these employers stop shooing me away is the day I will stop applying for government assistance! I'm 26 and willing to work with a college degree the question that now lay on the table now is the work force willing to take a young American back into their ranks?


Mr. Kawana, please check back here in a day or so. I'm trying to check on something. It may go nowhere, but then again, it might.


Mr. Kawana, I hope you've checked back here. I thought that HCAP (Honolulu Community Action Program) provided assistance in getting through the interview process, including the possibility of clothing that will get you through an interview. The job market in Hawaii is so tight that everything matters. Here is the reply I received this morning:


"To answer your inquiry, yes, we still provide Job Readiness Training and, if funding is available, we can offer assistance with providing clothing for employment and employment search.

I invite you to let the commenter, or any person you feel that can benefit from our services, to contact our office at (808) 521-4531 and have him/her ask for a District Service Center that is most accessible to them. We have 5 offices located across Oahu."

I've worked with HCAP before, and believe they are an agency who cares and is effective in assisting people get by the barriers to employment.

Hope this is helpful.