“Garbage can model” of management resurfaces at the University of Hawaii

This website was perhaps the earliest and the only venue to highlight problems with the UH plan to locate a high-containment laboratory stocked with deadly human pathogens amid the condos of Kakaako. At that time, the Orwellian-named biosafety lab was to be located near a tsunami evacuation zone, a zone mapped out by UH itself, which carved out the proposed area and the location of the UH medical school facility as “dry” in the midst of the low-lying wetlands. Sure.

Then plans changed. The Pacific Health Research Laboratory was to be located in Kalaeloa. Last week, that plan was cancelled by UH as well.

Ian Lind chronicles UH’s disappointing handling of the issue in his article UH administrators battle over bio lab funds (ilind.net, 4/2/2013). He reported that infighting and a battle of public emails ensued around the cancellation plans of what had recently been described as a facility important to the state, the country, and the world.

Without a management structure capable of rising to the occasion, UH once again sought guidance in the garbage can.

There is actually a model of organizational structure called the “garbage can model” which can be applied to some (primarily mid-level) universities in particular:

Why “garbage cans”? It was suggested that organizations tend to produce many “solutions” which are discarded due to a lack of appropriate problems. However problems may eventually arise for which a search of the garbage might yield fitting solutions. A snip from a glossary of terms:

The events described in Ian’s article describe the activities of an organization that has no rudder to steer it, if I may change the metaphor for a moment. Add 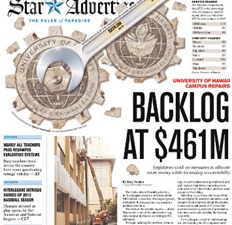 to this the recent front page news reporting UH’s dismal management (if one may use the word at all) of its repair and maintenance responsibilities, and (need one mention it) its recent costly reaction to the Stevie Wonder concert blunder, and the university’s ability to manage itself should seriously be called into doubt.

It appears that the Legislature is aiming to fix the problem by micromanaging the university, or in the case of the maintenance backlog (which requires a critical and rapid response) by removing that function from the university altogether.

This doesn’t help the university to learn and improve its own management capabilities. I’ve held here, and in an op-ed in the Star-Advertiser, that Senate investigative committees and star-chamber hearings are not what we or the UH needs. They need to get rid of that garbage can (first metaphor) and steer a course (second metaphor) to management competence and self-sufficiency.

The concept of autonomy for a state university is a good one, but we don’t want to fund the Titanic (second metaphor again). What lawmakers could best do is either help the university to put in place a structure that will produce sound management at some point in the future, or if administrators are unwilling, then impose competent management upon it.

Managing any organization is no longer rocket science in 2013. There are experts, gurus, and examples at other universities, if one looks for them.

We don’t need to endure potholes because the city doesn’t know how to fix roads, and we don’t need to endure current and future flubs at UH because the university doesn’t know how to manage itself. These issues are soluble. Goals can be set, expertise can be sought, and progress can be measured. While the Legislature can assist with immediate crises, the students, faculty and taxpayers deserve and require competent management of the state university system as a whole.

It’s our tax money, and we shouldn’t allow it to be dumped into a garbage can.