Hawaii Speaker of the House to hold fundraiser during session, lobbyists mark your calendar

This ad ran in Sunday’s paper. Compared with the previous two legislators, Rep. Souki’s bash this Friday in Waikiki might appear cheaper and less ambitious.

But it’s not. Rep. Souki happens to be the current Speaker of the House, the guy who determines if bills will live or die. What is the ethics of holding fundraisers during session when the Speaker holds such power over bills that may benefit contributors? What kind of an example is Rep. Souki setting for other legislators? And what chance would a bill that bans fundraisers during legislative session have to pass while he is Speaker? Actually, what chance is there that the bills introduced to do just that would even be heard?

Rep. Souki represents Maui, but of course few, if any, of his constituents will likely be able to afford the air fare to come to his fund raising party.

The ethical issue of holding fundraisers during session primarily to attract lobbyist, corporate and special interest money would apply to any legislator in any state.

In Hawaii, though, our state legislature is structured something like the Shogunate in feudal Japan. And Souki is the shogun of the moment. Committee chairs listen and obey the Speaker. He appoints members to crucial conference committees. When you read about another ugly “gut and replace” caper (and you will) to push through a law not supported by the electorate (gambling, possibly?), it could not happen unless blessed, if not ordered, by the shogun. 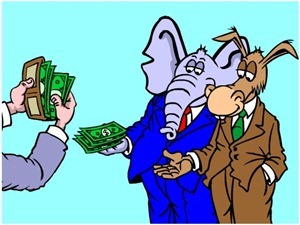 As a result of the unfortunate Citizens United decision by the US Supreme Court, corporations find ways to contribute virtually unlimited amounts to candidate coffers. The old-fashioned fund raiser has not been made obsolete, though. As Souki’s ad indicates, you get to spend an evening with him if you come. Actually, it’s only two hours of face time. Truth in advertising, I suppose. But we can suspect, at least, that really successful lobbyists continue to have access to lawmakers back at the State Capitol. And how do you measure a good lobbyist? A good lobbyist is one who makes effective investments. That is, the bills pass.

That’s the name of the game. Money buys influence in American politics. Unfortunately, voters are stuck at home and can’t taste the goodies served up at these out-of-town fundraisers. The red carpet is not spread out for them.

Well at least the room selected is transparent.....the "Lobby Conference Room". I guess it informs everyone what the event is for.


Awesome. I didn't see that. I'm going to highlight your comment in the article, and many thanks!


Print the names of those attending so cross checking can be done with bills for a conflict of interest on the part of the speaker.


That's a challenging task. Short of standing outside and making a video of everyone entering, how could one know who attends?