Which neighborhoods are responsible for Honolulu traffic jams?

Do transit planners in Honolulu understand the causes of traffic congestion that is choking the city and negatively affecting the quality of life of its residents?

Honolulu has done little to relieve traffic congestion that plagues daily commuters and that has earned it the distinction of the city with the worst traffic in the country.

There’s no flex time, traffic signals seem to work against the flow of traffic, and there are no restrictions of parking in the city center, for example. Also: under former mayor Carlisle, bus service was curtailed at at time when ridership should have been encouraged. Bus routes have not yet been restored even to their former capacity.

Oh, a train is planned. But even its proponents concede that traffic will continue to increase even when the expensive line goes into service.

A research study completed by MIT and Berkeley and highlighted in a Boston Globe story published yesterday discovered that bad traffic can largely be blamed on commuters from a small number of neighborhoods.

When commuters from these census tracts clog the roads, the congestion ripples throughout the entire metro area, making everyone’s commutes longer

The study employed cell tower data to anonymously track drivers on their daily travels. Among the study’s findings, the Boston Globe reports:

Besides letting us point the finger of blame, the research suggests a potential new approach to alleviating traffic: focus on those problem neighborhoods. The engineers calculate that if you were to reduce the number of car commuters from those 15 areas just 1 percent, all drivers across Boston would get home about 18 percent faster each night. 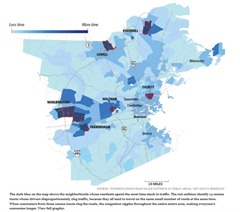 Honolulu might usefully conduct a similar study. Ideally, it would have been done before plans for the elevated train had been committed. How do we know, for example, that our traffic congestion is not due to neighborhoods in Leeward Oahu that have always been notoriously underserved by transit improvements? Should the train (or some form of high-speed transit) have gone to Waianae, for example?

The MIT/Berkeley study could be a high-tech low-cost source of information for urban planning. That is, if only we did urban planning here.