UK doctors get on the soda tax bandwagon

220,000 doctors in the UK agree with Hawaii advocates that a soda tax could be an important part of a comprehensive program to reduce the rate of obesity over time:

Britain's 220,000 doctors are demanding a 20% increase in the cost of sugary drinks, fewer fast food outlets near schools and a ban on unhealthy food in hospitals to prevent the country's spiralling obesity crisis becoming unresolvable.
…
The academy castigates attempts by previous and current governments to counter obesity as "piecemeal and disappointingly ineffective", and woefully inadequate given the scale of the problem. One in four adults in England is obese, and the figures are predicted to rise to 60% of men, 50% of women and 25% of children by 2050. 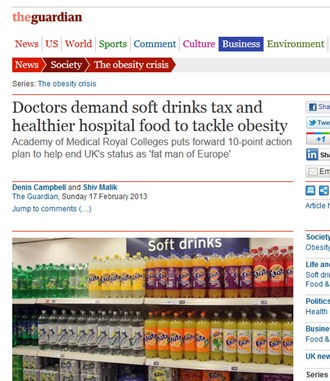 Different jurisdictions are trying different approaches to managing the obesity epidemic. The UK doctors are suggesting a trial of a 20% tax as part of a comprehensive program designed to head off the possibility that the health care system will not be able to cope with the coming crisis.

Disappeared News first proposed a tax on sugary soft drinks in an October, 2009 article and followed with several subsequent articles including one in January, 2010 which projected the estimated revenue that a tax could generate. A tax could be a win-win situation—bringing in revenue for the state or counties and contributing to a program aimed at reducing the incidence of obesity in the population.

Education can take a long time to sink in, but as the decline in tobacco use has demonstrated, it is very possible to put together an effective program to change public perception of a harmful practice. A soda tax can be part of that program.

You don't need to tax them, just remove subsidies for corn.