“There is only one group to blame for the continued suffering of these innocent victims, the House majority and their speaker, John Boehner. This is not a Republican or Democratic issue. National disasters happen in red states and blue states and states with Democratic governors and Republican governors. We respond to innocent victims of natural disasters, not as Republicans or Democrats, but as Americans. Or at least we did until last night.

Last night, politics was placed before our oath to serve our citizens. For me, it was disappointing and disgusting to watch. …. Last night, the House of Representatives failed that most basic test of public service and they did so with callous indifference to the suffering of the people of my state. “

In his impassioned press conference three days ago, New Jersey Governor Chris Christie blasted his own party leaders for holding up disaster relief for areas affected by Hurricane Sandy. If you haven’t heard his speech, here is an extract: 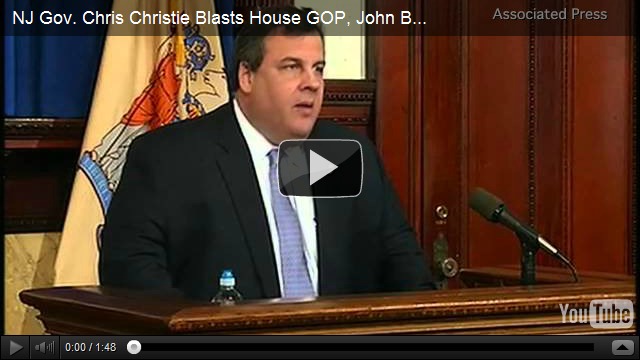 Without doubt, this strident stand on behalf of Christie’s constituents will serve him well politically. On the other hand, it’s great to hear someone in the public spotlight take on GOP stonewalling. It’s mind boggling that Republicans chose to skip authorizing badly needed relief funds. Heck, many of the people driven out of their homes (305,000 affected in New York alone, according to reports) are themselves Republicans.

But Christie is not correct in saying

We respond to innocent victims of natural disasters, not as Republicans or Democrats, but as Americans. Or at least we did until last night.

Mother Jones countered this claim in an article posted the next day, responding not only to Christie’s statement but to a floor speech by New York Representative Peter King, also a Republican:

But [Rep. Peter] King and Christie shouldn't be surprised. Boehner's stonewalling on disaster relief, far from a clean break with tradition, has become characteristic of how the currently deficit-obsessed GOP does business.

Mother Jones listed up some memorable disasters and Republican attempts to block funds for relief, noting Republican votes against Hurricane Katrina relief, Republican leadership killing a bill to extend a relief deadline for Hurricane Ike so that Texas could draw on the funds, and Republicans blocking relief for 9/11 responders, who finally got it at the end of 2010.

The electorate, of course, have short memories. And those who watch Fox News or for that matter, any other popular news channel, or who read the commercial press, won’t put all this together.

After King and Christie (among others) blasted GOP leadership, they approved only a down payment on the total relief bill. So it’s not a done deal yet.