I’ve written before about problems reading articles on the Star-Advertiser website – for example, I’m logged on but it won’t show me the article, saying I have to log on again. Or I’ve been logged out for days but can’t get in again because it says I’m still on. Most of the problems I don’t blog about.

But this morning is a doozy.

It’s time to renew. So I grabbed my Amex card and went over to their renewal page and logged in. I carefully copied the card number and so on, and pushed the Submit Payment button.

These days, making a purchase on-line is an everyday thing for many people. It is really convenient to be able to order stuff in front of a computer screen, unshaven and in my pajamas perhaps. And it always works. Zillions of websites carry out these transactions all the time. And it always works. 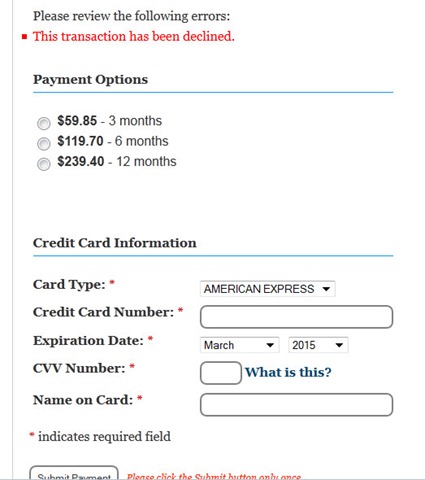 I typed in the few bits of info it asked for. It came back, “This transaction had been declined.”

Now, I used an Amex card, so there’s no payment limit. Maybe I mistyped something??… so I did it again.

Just to be sure, I called Amex to find out why my payments were declined. Did I fail to pay my Amex bill, perhaps?

Amex said that the Star-Advertiser payments were not declined—they showed two payments and suggested that I call the paper to set things straight.

Which is what I did. The helpful phone lady could not help in this case, and said she would refer the problem to the accounting department. She said that my account showed no payment at all. I asked for a call back. Maybe they don’t work on Saturday, because I’m still waiting.

Putting up a reliable eCommerce page on a website is now pretty much routine. Except for the Star-Advertiser, apparently.

This bugs me for a particular and very personal reason. When I decided to move to Hawaii people kept telling me that it was a dead-end for a technical person. I wanted to believe otherwise. They told me that it would be the end of my career, Hawaii is where people who couldn’t make it in California go to die, they said. I wanted to believe otherwise.

I made myself believe in the high-tech revolution that DBED (not yet DBEDT) was promoting. I conveniently ignored all the two-floppy IBM PCs I saw around me at a time when that technology was already dead as a dodo elsewhere. I tolerated the pathetic data access at the university, assuming they would eventually figure it out. I got used to sending faxes only during the daytime because people here often turned off their fax machines overnight. Go figure.

But it’s 2013 already, and stuff like this still happens here. And the state courts still have computers that were clunky decades ago. And the City is happy to post smartphone apps on its website that don’t really work. It goes on and on.

So that’s the personal button that the Star-Advertiser pushed this morning. I hope they fix the problem, but I’m not holding my breath.

I hope their accounting department is not run on abacuses or Papyrus reeds, that’s all.