In an article yesterday I questioned the wisdom, if not the sanity, of conducting 55 raids that have failed to dislodge (de)Occupy from its encampment on Beretania Street.

Since red tents were tagged yesterday, another raid is possible. Of course, by the time police, garbage trucks and that front loader arrive, the red tents will not be there.

The city installed a camera that focuses as much on the encampment as on traffic, and as you can see from the image below, is of much higher quality than the traffic cams you can watch on the city web pages. The encampment is now further down the street, but the city could easily see yesterday that the blue tents it tagged were no longer there. The tents were red.

So the question naturally arises: if they went to the expense and trouble of installing a camera to spy on the encampment, why then waste additional taxpayer money conducting a raid when nothing can (legally) be removed? 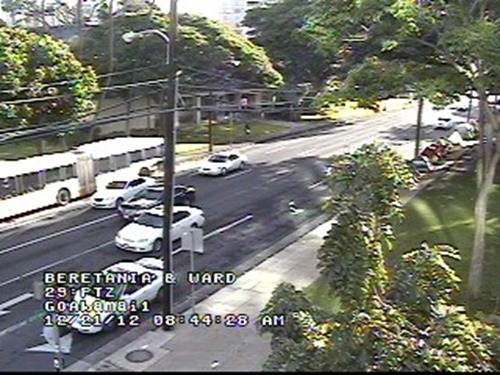 This morning it appears that the red tents tagged by police yesterday are already being taken down.

The ordinance and the court-enforced settlement require the city to store property and to return it. In effect, they are providing a free storage service that any citizen of Honolulu can take advantage of. It’s even better than those public storage lockers in the sense that the city comes to pick it up from you, and you don’t have to pay any rent. From the agreement:

Which leads one to ask: Why do they do this? And another question: Who wrote the city council ordnance in the first place?

Finally, of course the city is not following its own law. If you do entrust property to them, count on it being damaged or destroyed. Despite the court order, city misconduct was evident in yesterday’s raid.

Sure, anyone jaywalking in front of a cop risks getting a ticket, but the city breaking the law got no reaction from the police. What else is new?


Someone down at the camp had told me that the camera was there before the tents went up, but now it points away from the Beretania and Ward intersection to look down Beretania in the direction of the Academy of Arts. A traffic camera not watching the traffic?