Strangely, it appears that at least some of the people leading yesterday’s raid on (de)Occupy at Thomas Square were not familiar with the court-ordered agreement that restrained their conduct during the raid.

Today a status conference was held on the lawsuit filed by (de)Occupy Honolulu on their “Motion for Sanctions, Enforcement of Agreement, and/or Temporary Restraining Order” resulting from allegations that the city violated its court-ordered agreement during the December 20, 2012 raid on the encampment.

Plaintiffs wrote to the court:

2. Although the conduct of the City employees was much less egregious than was the custom and/or policy before the filing of this lawsuit, the City nevertheless materially breached the terms of the agreement.

3. Specifically, the City: seized “untagged” items; rummaged through and seized personal property within tagged tents without any meaningful attempt to identify the owner of the tent and without permitting the owner to remove their personal property from the tent; failed to exercise due care to prevent destruction or harm to seized property; failed to store seized items in numbered bins and/or failed to identify the bin number on post-seizure notices; and, now, refuses to immediately return seized property to the property owner despite the property owners’ attempts to present the City with the appropriate post-seizure notices. 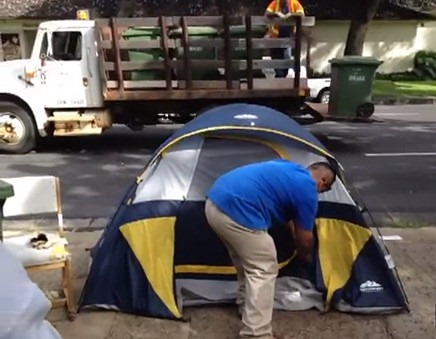 Caught on video: According to a declaration filed in federal court today, “A City Worker opened, entered, and rummaged through the property of the blue tent without attempting to identify the owner and without providing anyone the opportunity to claim the items within the blue tent.” 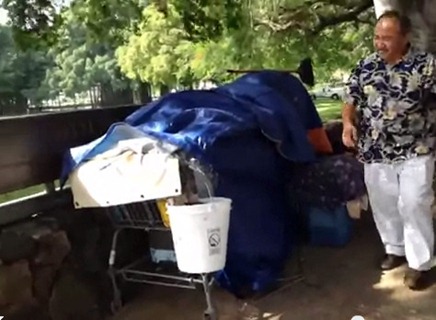 Caught on video: “Nearing the end of the raid, I observed the unidentified male from ‘Exhibit B’ walk down near the end of the park to the Northeast corner of Thomas Square. Here, a homeless individual had erected a temporary shelter using tarps. The unidentified male picked up the edge of the tarp and looked underneath the tarps into the shelter. I did not see any tags on any of the tarps and the shelter was not seized. Instead, the homeless individual was told he ‘needed to leave.’ “

The (de)Occupy group is clearly organized, but not the average homeless family or individual. There could be hundreds of stories out there of how the city is violating its own ordinance and harassing them each day.

The declarations filed with the court include the assertion that a supervisor of the raid “did not know about any Order, that he was not held to any Order, and essentially, that he did not care what any Order said.” The declaration states that a video of the exchange is attached as an exhibit.

I did not see any commercial media covering the raid, nor do reporters show up around the island when the city ordinance is invoked against homeless encampments. Despite the news vacuum, you can be a witness by viewing the unedited YouTube video here.  A copy of two declarations as filed with the court can be downloaded here. The motion for sanctions is here.