Inouye’s loss as a loss of Insidership for Hawaii

Every Sunday I spend a bit of time first thing in the morning trying to find insight in the Star-Advertiser. 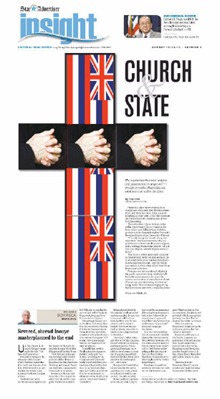 The thin section is hidden after money, after the food advertising section, ‘way down in the pile after the comics and the stack of ads. But the search is well worth the trouble. I need my Richard Borreca fix.

Borreca is an Insider. During the legislative session he covers whatever is hot. If I’m in a hearing and he’s not there, hot it’s not. If he is in the room, I look forward to seeing if his take on the subject matter is the same as mine. See, I’m studying up to be an Insider also, in a way.

It’s no surprise that Borreca’s column today is about Daniel Inouye, who was as much a Congressional insider as it’s possible to be. And although the majority of Americans may have lost faith in Congress and the corporate-money-grubbing politicians whom they originally elected as their representatives, Inouye, as one of the leading insiders, is credited with bringing home the pork to Hawaii. The press has not hesitated to mention this, including, of course, that that era is now ended for the state.

His replacement, no matter whom she may be, will not be an insider for some time.

“Inside” or “Outside” is an important way to slice politics today. It’s not so much “Democrat” or “Republican” or even “Left,” “Center,” or “Right.” They are all responsible first to their Wall Street masters, one party just a bit more than the other.

Insiders can be recognized by the swarms of lobbyists crowding around them. They have the fattest campaign war chests. Insiders do not necessarily represent their constituents, and they are seldom the grass-roots candidates. Rather, they arrange themselves in factions and grasp for increasing power. Popular representatives, such as Dennis Kucinich, are barred from these factions, effectively denying power to the people. And we know this. My words will shock no one.

And so our government has become increasingly alienated from the electorate. We send these actors to Washington but we don’t write their lines. They get re-elected because of corporate spending. Like actors, they have to put on a show for us locals. We become sheep, following the directions of TV advertising funded by corporations and partisan billionaires. Does anyone check the incumbents’ voting records? It isn’t easy to do, the newspapers and TV favor ads over factual articles at election time.

Hawaii is noted for low voter turnout. It doesn’t surprise or concern me much. Who wants to be a sheep anyway? Insiders get reelected because they are Insiders. No matter what we do. Insiders, by dint of their Insider-ship, can easily get reelected, right? We’re caught. We want Insiders like Inouye was to represent us in Congress. Yet we know that whether or not we vote for them makes no difference. Once they gain Insidership they tend to remain in office forever. So whether I vote or not, what does it matter?

This is not to say that Outsider politics has no influence, but it has the strength of a candle compared to the 500-Watt bulb of the corporate-funded Insiders. The recall election in Wisconsin failed to unseat a problematic governor despite an incredible Outsider effort. Both the Tea Party and Occupy uprisings are powerful Outsider movements that may yet challenge the Insiders, but their longevity and potency are not assured.

Outsider politics is likely the only force working to bring about critically needed change in Washington. Let’s see how it goes.

Back to Hawaii—the local Democratic Party leaders will have 15 minutes of fame when they present their list of three potential candidates for Inouye’s Senate seat to the Governor, then it’s back to obscurity for them. Likely Hawaii’s prominent politicians had already pondered their course should Inouye not fill out his term of office and worked it into their strategy. They’ve no doubt been whispering among themselves about a vacancy for some time, creating one contingency plan or another.

Certainly, what Democrats hope for and cannot achieve easily is to send someone to Washington who will become an Insider as rapidly as possible. This is supposedly required for our economic prosperity. But there are secondary considerations.

Assume for the moment that Hanabusa becomes the anointed one. This will open up her seat to a new scramble for Insider-ship.

Will Djou or Case have another go at the House seat?

Did the chance to run again for Congress fit into Case’s campaign strategy last time around? This is all speculation, but it illustrates the complexity of the Governor’s decision. Would he risk putting Djou, a Republican, in office if he did send Hanabusa to the Senate? After all, voters may prefer a real Republican to a fake Democrat. In which case, would Hawaii be closer to Insidership with Djou, in a Republican-controlled House? Strange thought.

Borreca explores Hanabusa as the anointed one in today’s column. She was chosen by Inouye to succeed him, and her appointment without delay would give her a few moments more seniority in the Senate. Seniority seems important as part of Insidership, of course. Being more senior means more lobbyists flitting about one’s office, I guess, and so forth.

Washington is far from Hawaii. Inouye spoke with a highly educated, not a local voice. While we say he has finally come home, his home was in the Beltway and his job was to bring in the pork for Hawaii. Likely his replacement will not have a similar voting record and hence a longer slog to becoming an Insider.

Hawaii will just have to adjust, hence the speculation in print and on-line over what Inouye’s loss will mean to us economically. The speculation is certainly valid, but it underlines the need to identify local leadership to carry us through whatever his loss may bring.

Related, and more on Insider/Outsider, only $1.99 as an ebook:

The rai is/was certainly a beltway fixture not suitable for Oahu. To destroy agricultural land and the view plane is certainly an indication of loss of touch. Why is there a seniority system? Should not all elected to congress be on equal footing?


The only value of the outsider is as "the bad cop"- so that the insiders can play the good cop and say "you'd better cut a deal with us or you'll have them to contend with." But if the insiders let the outsiders "get in" they risk being totally ineffective.

Look at the Tea Party- as an outsider force they led the Republicans to victory. Only problem was that the next time around they challenged them from the right in primaries and then, in some cases, replaced them. That left the Republicans totally ineffective in cutting deals with the Democrats because their bad cops outsiders were suddenly standing right next to them watering down their unity. Suddenly Republicans could no longer threaten the Democrats with having to deal with their "bad cops" because THEY couldn't even deal with their own bad cops.

Moral: don't elect your outsiders and make them insiders. They're way more effective where they are and will f*** you up if you let them become insiders.


Gotta love Andy Parx. As someone who tries to walk the boundary between insider and outsider, I appreciate the truth of what Andy is saying.

But rather than "Outsider-Insider," let me suggest an alternate metaphor. You have the front room for the public, and the backroom for those who have earned enough trust to gain entry and participate in the discussions the public is not privy to. But there is a "back room" to the backroom. And there is a private elevator from that room which takes only a very select few up to the penthouse.

In the immediate case of Brian Schatz, he has gained admission to "the most exclusive club in the world." But he is still an untested newcomer. He is not a full member. He will learn more and gain more influence to the extent he is trusted by the MORE exclusive club within the Senate. His very first vote was against the extension of the FISA law which allows for secret and largely unregulated surveillance of the world's people, including American citizens, both here and abroad. He was in the minority of senators, even among Democrats, who voted against the extension. Two cheers for that. But the congressional decision-making process is flexible enough that leadership can allow individual members to vote in ways which will please their constituents (and salve their consciences), while allowing the passage of legislation desired by the corporate/political elite.

I think the big test for Brian will be where he stands on Elizabeth Warren's attempts to regulate Wall Street investment banks. That may be the most defining issue confronting Congress in this period. If he fails us on that one, his elevation was meaningless. Well, except for his personal advancement.

On the core issue in Andy's comment, the relationship between the movements outside of power and the leaders of government, that quandary has troubled political activists throughout the modern era. It was one of the key issues debated within the Marxist movement in the late 19th and early 20th century. Andy may be familiar with the literature, but for the benefit of others, this was at the heart of the dispute between Eduard Bernstein, Karl Kautsky, Rosa Luxemburg and, ultimately, Lenin. Put in their language, what is the relationship between Reform and Revolution? Does the struggle for reform lead to revolutionary conditions or thwart the development of those revolutionary conditions? Does a political movement which demands major changes inevitably get coopted when they win partial victories and become defenders of the compromise as well as allies of those who granted the concessions?

The four wrestled with these issues in depth and explored the "contradictions" with great logic. Their writings remain illuminating for those able to give them non-dogmatic consideration. Luxemburg is, of course, my emotional favorite. But it should be kept in mind, she was murdered in a failed uprising she did not actually support, by reactionary Freikorps militia, with the collusion of the Social Democratic government. She did not triumph over the problem but was killed by it.


Rosa Luxemburg's book isn't to be found in the Hawaii Public Library. We're on a different plain these days. I recall when a discussion such as you have raised could be carried out -- that is, one could actually find another person who might know even who these people were. (sigh).

To start with, I think Schatz has the potential to do quite well, if Washington doesn't get to him first. Let's see how it goes.