The conventions are over, but conventional battles continue as the press fails to report

At last, the political conventions are over. The commercial press acted as cheerleaders or stenographers, depending on the depth of bias in the individual newspaper or wire service, as they dutifully reproduced candidate speeches. 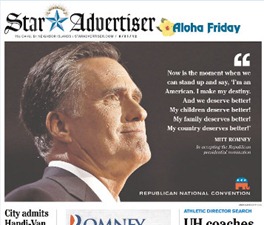 Despite the prominent play the Star-Advertiser gave Romney on August 31, granting him most of the front page, what he said was not news. What they chose as a quotation will not go down in history, it has no substance. There was plenty of other news more suitable for that spot, but hey—the editors made their choice. We readers don’t have to mistake fluff for news, however.

In choosing to echo a scripted campaign statement, they failed to report the news. There was some news, but this is not it. Reporting on shallow, scripted propaganda omits the wider social context in which it political actors operate and how their actions affect the livelihoods, health and well-being of American families.

Sure, at the Democratic Convention, Michelle Obama accomplished a killer delivery, reading her words and her emotional queues from a teleprompter. So many reports that passed for news were simply repeating, in effect, what was on that teleprompter. Whose speech was better? It still isn’t news.

Not reporting certain news can be bias by omission. While some news outlets reported or commented on the many lies in Paul Ryan’s speech, many did not. Few noted the lack of substance on the Republican side. Few identified the contradiction in energy policy in Obama’s speech—that is, the conflict in simultaneously standing for reducing global warming while advocating increasing the use of fossil fuels including coal.

More news: how the Democrats forced a change in the party platform to back Jerusalem as the capitol of Israel despite opposition by delegates at a floor vote. The Daily Show did report that news (push the thingy at the lower right for full-screen):

(Full Sept. 6 episode on the Daily Show website is here.) (…and it’s very worth watching)

In many ways, this snip illustrates the separation between the parties and the electorate. That is, to heck with the electorate. I could put it more strongly, but this is a family blog.

The two conventions beg for analysis despite the fact that they were scripted events almost devoid of substance. In a way, they could be seen as part of a Civil War redux. Instead of muskets the battle rages with dueling TV commercials and social media tweets, but both sides are still dead serious.

The Civil War was more than a military battle and a huge sacrifice of human lives. It was a moral and ideological battle, and it echoes today in the Republican suppression of Black and Latino votes in swing states and in their consistent battle to eliminate women’s reproductive rights. Democrats have thrown the Magna Carta under the bus, along with immigrant rights and journalistic freedom. They beg for Latino votes even as they deport them in record numbers.

It is a battle as fervent and dividing as the Civil War was, short of a physical clash of arms. We are seeing slavery ideology reborn (though arguably it never died). We are seeing long-fought gains in women’s rights at the point of reversal.

On the other side, due process has been taken from the courts so that a president can choose which person he may kill without charge or trial, and he has not abolished the use of torture on his watch.

Depending on how Congress goes, rights that have been hard fought and won could be reversed. In choosing a side via our vote, we are being asked to choose between which set of rights will fall under threat first.

Both parties wish to install leaders in the presidency and Congress who will either restrict freedom or restrict individual rights. Obama’s policy of indefinite detention and illegal assassination is not an antidote to the other side’s class warfare or racist and misogynist policies. Neither side, neither candidate, represents a clear moral preference although we must make our choice (those who are not denied the vote).

Surely, in all this, there must be some news to report other than Conventional propaganda.