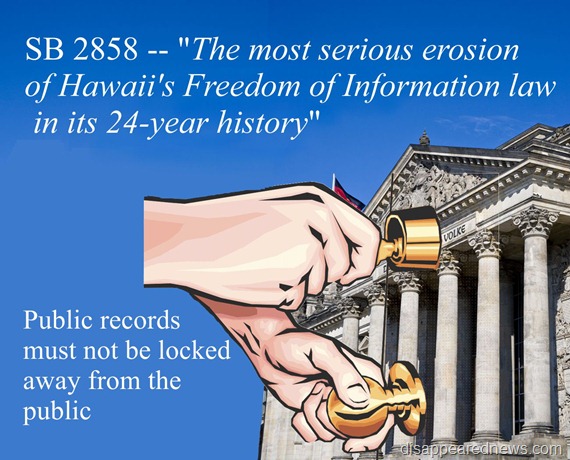 Disappeared News agrees with the various community groups that are arguing against passage of SB2858, now in conference committee.

Isn’t it also odd that this bill is being pushed through the Legislature by the Office of Information Practices, which should stand for greater openness in government?

As it is, this bill would allow agencies to delay and force the public to go to court if the agency did not want to release the public record. This is a giant step backward.

We’ve already paid as taxpayers for public records. They should be ours without hassle and without expense.

SB2858 will have the effect of locking away public access to the actions of government. Disappeared News makes extensive use of public records. We often post full documents here, as do Civil Beat and other websites.

Everyone loses if access to government becomes more difficult, expensive and time-consuming.

Once again, this is down to the wire. The bill may be decided by the conference committee on Thursday.

Just click on the emails and let them know you want public records to stay public. Or something like that.