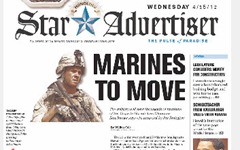 Front-page news today: it appears likely that 2,500 Marines will be relocated from Okinawa to Hawaii, probably to reside on Oahu, but not at the overcrowded Kaneohe Bay Marine Corps base.

Sure, additional Marines will boost Hawaii’s economy. But they will need cars. You can’t be a Marine in expensive Hawaii without shopping at Costco. And Mufi’s train won’t help with that.

In the end, is this really good for our economy? Will tourists still come if they spend their time sitting in traffic on the H-1? And what about us? Where’s the outrage over the paving over of land entrusted to us to preserve?

When will our state government come to its senses?  Actually, they won’t, unless we make them.

I am appalled that the Gov. would embrace this move by the marines. We are over crowded as is.


I can see why some might question the need for 2,500 more marines based in Hawaii, but I believe it is a separate issue from building more homes in central and west Oahu.


It is a separate issue, except that 2,500 cars here, 3,100 cars there, and before you know it, there are a lot of new cars on the road and not enough road for the cars.


2,500, plus their families) is just the beginning. I read somewhere, it could eventually total up to 80,000 Marines and families that need to be relocated from Okinawa.. to Guam or Hawai'i.


It appears that bill SCR139 (FORWARD-BASING A VISIBLE MILITARY FORCE IN HAWAII) that was recently deferred, is linked to this in some way.
Maybe SCR139 was intended to be a validation of all these military arriving.
So, since the bill did not go through, Abercrombie is just proceeding without it.
See, there is no justification for this influx of permanently stationed marines; not just a drain on the traffic situation, but much much more.
Abercrombie intends to set them up here in ʻHawaiian Paradiseʻ, not send them home where they originated from. He will be the soldiersʻ hero and to make his brownie points, he will jeopardize the balance of Hawaiiʻs cultural, economic, environmental, social, health, and much more.


And this was moving through the legislature but maybe it wasnʻt important enough so now has no hearing scheduled:

Is it no longer scheduled because since the boys are over there we have to support them, no matter what they do?