Chair of Water, Land and Housing Committee holds fundraiser in town during session

This election year should be the poster child of corporate funding of politicians, given the Supreme Court’s Citizens United decision. But at the state level, contributions directly to a candidate are the best way for a corporation to invest in their very own special politician. No Superpacs needed.

Tonight is a fundraiser held during session for Senator Donavan Dela Cruz, chair of the Water, Land and Housing Committee. He won election in 2010 with the aid of $231,365 in political contributions, according to followthemoney.org. He was featured at Disappeared News last year after holding a hearing, also during session, without public notice, but with a press release, and then followed it immediately with a fundraiser. I’ll recap that grand day in March 2011 below.

At least 31 states set some sort of limit on lawmakers holding fundraisers or raising funds during legislative sessions. Four states totally ban contributions by lobbyists or political action committees. Fourteen states have banned political contributions entirely during session, and a few extend that to a time period before or after session.

The idea, of course, is to reduce the influence of lobbyists and special interests on the decisions of lawmakers. During session there are bills introduced that could bring big bucks for one or more large companies or even unions.

Lawmakers are supposed to represent their constituents, not big business. But we all know the truth.

Hawaii has no such law, and certain politicians take good advantage of that. I’ve highlighted a few shindigs in the past, particularly those where the state lawmaker from a Neighbor Island holds a bash in town where constituents are unlikely to attend, and instead, lobbyists and large corporate donors are the prey.

In Hawaii, committee chairs are extremely powerful, to the point where they warp democratic space. Whether a bill ever gets heard depends entirely on the whim of these powerful few, and their whim is fueled by campaign contributions. Should they be allowed to ask for money from lobbyists and corporations while the financial future of these special interests may hang in the decisions they make as committee chairs?

This year I’d like to try and catch every one of these fundraisers. Why shouldn’t voters know who really pulls the strings for their state representative?

You vote for them, but when they set up shop at the State Capitol, who do they work for?

Today’s highlighted event is taking place even as I type this, in the Mandalay Restaurant in Honolulu, not far from the State Capitol. It’s a fundraising favorite. Senator Donavan Dela Cruz is throwing a bash at the restaurant from 5:30 to 7:30 p.m. and is asking for $100 per attendee. Senator Dela Cruz represents District 22, which is a central Oahu district, so at least his constituents might possibly drive over to attend.

Sen. Dela Cruz is the chair of the Water, Land and Housing Committee and is the go-to guy for developers or other deep pocket folks concerned in any way with land use in Hawaii. You wanna have him on your side if you plan to build something someplace. You need him. Friending him on Facebook isn’t enough, the way to a politician’s heart is through your pocketbook.

For what happened last year, see: Hawaii senate committee meets without public notice right before a fundraiser for its chair, (3/31/2011).

I wrote again in November, when the OHA Kakaako land deal came up:

As Chair of the Committee on Water. Land and Housing, there is a considerable amount of work to accomplish in order to improve our business climate for proper and responsible development while protecting our natural resources. To date, my Vice Chair Senator Malama Solomon and I have started to build a foundation for a progressive agenda to move Hawaii forward with land use strategies, public private partnerships, and restructuring the departments within our purview.

With your help and financial support, my campaign will have the resources to communicate and promote our agenda and accomplishments.

Here’s the report from followthemoney.org on how well Sen. Dela Cruz did the year before, which was an election year. Imagine the cozy crowd at the Mandalay right now—it probably looks something like this: 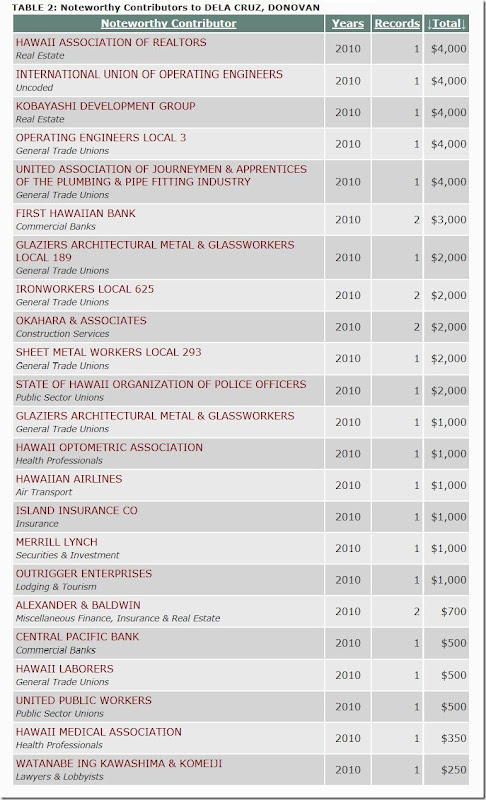 This is the breakdown by industry and by sector: 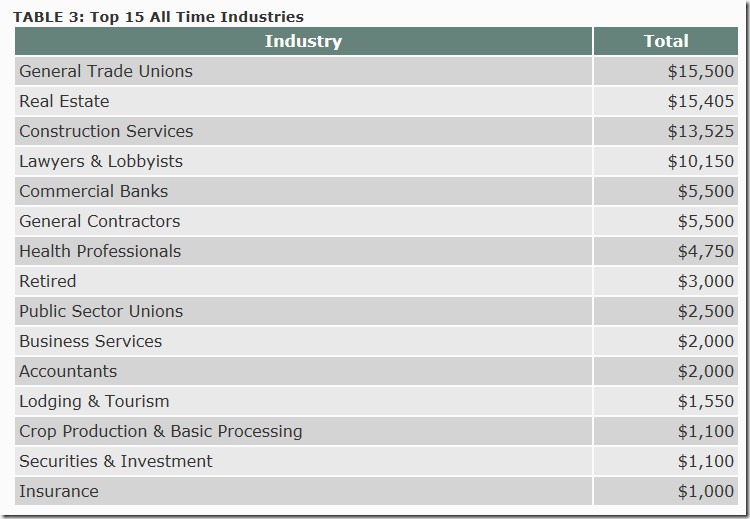 No surprise, for a powerful chair of the Water, Land and Housing Committee. Oh, and he’s a representative of the families living in District 22. I wonder how many were at the Mandalay tonight?

Donovan has thrown all caution to the wind and has decided he will get further by being the unashamed advocate for development interests and the Old Boy Machine than by worrying about environmentalists, good government groups and the very small population of engaged citizens. BY the time his reputation catches up with him, he will be sitting pretty.

And, given the rewards system which 'incentivizes" behavior, that is not an unreasonable assumption.