Keep the leaks coming folks (to leak [at] disappearednews.com), and thanks to all those who care about honest government.

Just to let legislators know that some of us do care, here’s a meeting held on March 28 by the Senate Committee on Water, Land and Housing. It was held in the auditorium at the Capitol, but no public notice was posted as appears to be required by Senate Rule 21 of the 2011-2012 rules of the Hawaii Senate. Instead, the committee sent out a press release (see below)..

The subject matter is of interest not only to the public but to a hoard of developers and contractors. Some of the topics covered included 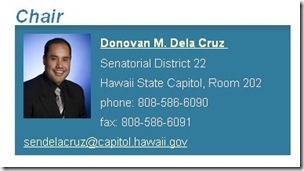 Ok, mistake number one, no public notice to a meeting the public should have been invited to, held by a committee of the Hawaii State Senate.

Second mistake: it was scheduled for the same day, and immediately before, a fundraiser held by the Chair, Senator Donavan Dela Cruz (see bottom document).

That’s too close for comfort. It’s like saying, “Hey guys, come to this informational meeting at the Capitol then come n over to the nearby Mandalay Restaurant for a little fundraising and partying!”

Plus, of course, the fundraiser is being held during session while these matters and others are before the chair of the committee who’s holding the fund raiser.  Too, too close for comfort.

Where is the Senate President on this? I called the committee clerk and he did not see a problem with holding the meeting. I’d love to know whether the Senate intends to enforce its rules, and how. 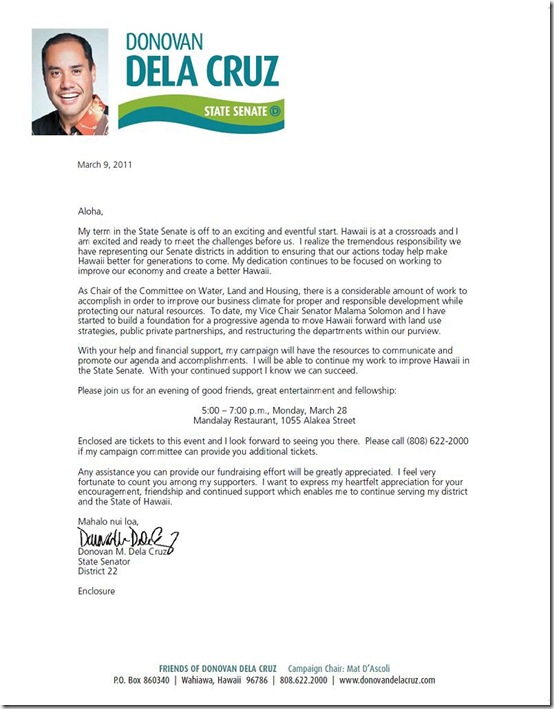 Such a great post you have which all developer should have to comply the following required . Many of these requirements were accomplishes already.