Each year a small number of ethics bills are introduced into Hawaii’s state legislature. Each year they remain unheard.

Your help is needed to break that unenviable tradition.

SB2561 would ban fundraisers during the legislative session. It’s been referred to the Senate Committee on Judiciary and Labor. That doesn’t mean it will be heard. If you want to help, please call Senator Clayton Hee, (808) 586-7330 and ask him to schedule SB2561 for a hearing.

There’s an argument that legislators can hold fundraisers at any time, so what’s the big deal? The big deal is that during session bills come up before legislators that can mean big bucks for some special interests. So holding a fundraiser during session, while these bills are still subject to vote, is like wearing a sign saying “Influence me!” on a legislator’s chest.

Disappeared News has been reporting on this fundraising abuse at least since 2008:

A pet peeve among reform advocates  is the holding of fundraisers during the legislative session. Though corporate contributions may be problematic at any time, there's just something about passing the hat while considering and voting on measures that can directly affect a company's profits. Several Hawaii lawmakers don't mind doing this, though.

Committee chairs have awesome power in Hawaii's legislature—they can hold or defer (that is "kill") a bill for example, or they can introduce amendments essentially written by the industry affected. They can essentially direct a vote by compliant members of their committees. This is anti-democratic and should be changed, but for now, they wield this kind of power.

You might think that these powerful legislators in particular would refrain from  shilling for donations during session. You would be wrong. 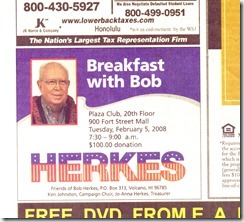 A great example of this has been Rep. Bob Herkes, state representative from the Big Island. I have to keep saying that I’m not picking on him in particular, just that his newspaper ads have been such a great illustration of why legislation to ban contributions during session is needed. Indeed, Herkes’ name was not on the list that Civil Beat posted for the 2012 election cycle. Well, this session has just begun. We’ll see.


The ad specified a $100 donation and was held at the expensive Plaza Club in downtown Honolulu, not out on the lava fields. Herkes’ constituents on the Big Island are unlikely to be the target of this ad, which appeared in a Honolulu newspaper. Besides, $100 is a bit steep, don’t you think?

But for Honolulu lobbyists and corporations, it’s a steal. Hence the ad can be interpreted, if you like, as offering the chance to hobnob with Bob in exchange for this contribution.

Sorry, Bob, but I can’t find a better example to use.

Is this just a theoretical objection? Check out this snippet from a Big Island Weekly story:

Bob Herkes (D-Puna, Ka'u, Kona) didn't have a single contributor with an address in his own district. He did, however, accept money from 15 registered lobbyists, including Radcliffe ($2,000) and Botti ($2,000), many of whose clients had potential interests that would fall under the jurisdiction of the Consumer Protection and Commerce Committee, which Herkes chairs. Among the committee's responsibilities are bills related to the regulation of health care, insurance, real estate, ground transportation, banking and other professional services. Herkes accepted more than $15,000 in contributions from health- and insurance-related interests, including $1,250 from the Hawaii Medical PAC; $1,000 from HMSA; $450 from HEMIC executive Bob Dove; $1,500 from the Hawaii Dental PAC; $2,000 from the Hawaii Insurance Council; and $2,000 from Island Insurance, $1,000 each from Marc Baptiste Jr. and Arnold Baptiste of the Hawaii Medical Management Alliance. Other big donors include Philip Morris ($2,000), the Plumbers Union ($2,000), Outrigger Hotels's OEPAC ($1,500), the Hawaii Association of Public Accountants' HAPA-PAC ($1,450), the Hawaii Association of Realtors' HARPAC ($1,500), Bail bondsman/bounty hunter Duane Chapman ($1,000), the University of Hawaii Professional Assembly (the university teachers' union, $1,000), and the Hawaii Association of Professional Accountants ($1,200).

We have a chance this year to put an end to this kind of fundraising. Do your bit for campaign finance reform by calling Senator Hee’s office and asking that he hear SB2561. Again, Sen. Hee’s number is (808) 586-7330. If you live in his district, tell them that. His email is senhee@capitol.hawaii.gov. 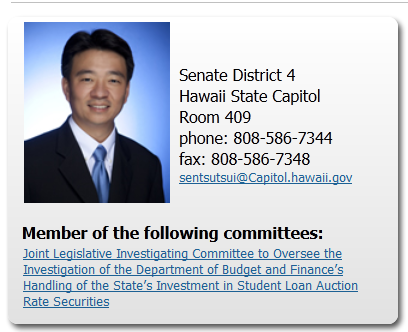 If you feel so inclined, try a call to Senate President Shan Tsusui with the same message. Phone (808) 586-7344 email sentsutsui@capitol.hawaii.gov.

I'm surprised that it only takes $1,000 to purchase a legislator. Companies like HMSA only need spend $1,000 to affect a law which could reap them millions. Where else can you get a return on investment like that.


I still need to write up that Ag event a couple of weeks ago. For just $50 admission fee, a legislator can get a huge return in campaign contributions. No connection? Sure.