A couple of bones to pick with Safeway, and kudos to Civil Beat

I really can’t imagine why the Hawaii Safeway/Sandwich issue got picked up everywhere and really important stuff that happens here is ignored.

Every so often I send off a link to Democracy Now, for example, but they never use it. It’s quite rare to hear Hawaii mentioned at all on that program. Yet on October 2, they ran a headline about the Safeway sandwich arrest thing. Go figure.

I’m sure you know the details of the incident by now—pregnant mom needs to eat something, devours sandwich in the store keeping the wrapper to pay. The family checks out not $50 worth of groceries as is reported but actually $150 (see the Civil Beat story here, which is the best account of the incident I have seen so far). They forget the sandwich wrappers, though, and are confronted by security before leaving the store. They are detained for a couple of hours in a break room by store security before police arrive, and are then arrested and handcuffed. CPS takes away the kid.

After the national uproar, Safeway drops charges and apologizes.

As the story made its way around the web, it collected probably thousands of comments, most of them as insightful as you might expect.

I would like to add to the excellent Civil Beat account that a store security guard has no authority to detain anyone. So there is the possibility of a lawsuit. Security guards are not police. A properly trained security guard knows this.

Eric Seitz, a Honolulu defense attorney, said Safeway security did not have the right to hold the family at the store for four hours.

“They do not have authority to arrest,” he said. “They can call the police. If the police don’t immediately respond, then there’s nothing they can do about it.” It took two hours for police to show up after she was stopped by Safeway security, Leszczynski said.

Seitz said he has represented clients in eight to 10 similar cases in the past 20 years — including one case in which a security guard lost his job after refusing to make an arrest. All of those cases resulted in settlements, he said.

[The CB story is written by Nick Castele, identified as an intern. Watch out for Nick—the story is not only professionally researched and rendered, it is easily the best I have seen anywhere. If CB isn’t paying Nick for his work, they should.]

Most accounts (and Internet comments) centered around whether the mother should have eaten the sandwich in the store, or whether CPS should have taken away a child for an alleged $5 theft incident. Underneath that is whether the police should have made the arrest, in which case CPS is probably bound to take the kid.

Aside from the Civil Beat article, I haven’t seen any that focus on the appropriateness of the action of the security guard or Safeway’s liability.


The incident reminded me that I had meant to post some pictures I took in a local Safeway just before “Eat Local” month (September). I totally forgot I took these pics. So let’s just make this a “dump on Safeway” article. It’s not that they don’t deserve it.

The Safeway stores that have been “made over” in the past couple of years kind of resemble the décor of a typical Whole Foods store. The restyling isn’t a copy, but it looks like an attempt to ride on the Whole Foods image (but putting “lipstick on a pig” etc. comes to mind). Stores are dramatically lit, wall signs are fancy and sometimes inscrutable. Like our local daily newspaper, I thought they could use a good copy editor.

This photo, for example, is of the area of a store under the “local growers” sign. There are no local growers there at all, of course. They probably mean “locally grown.” That’s picking nits perhaps, but the sign is fraudulent anyway. Only a fraction of the items on the shelf are locally grown. Some aren’t even grown at all, they are packaged products. A shopper could easily be fooled. 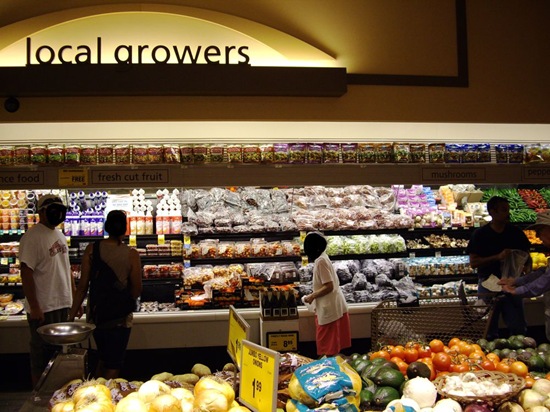 Produce continues to the right of this section. In fact, there is a prominent “locally Grown” sign right next to some cabbages, jicama, yama imo, and burdock root. All these things can be found locally grown in Hawaii (not sure about the burdock root, though). Ok, thought I, here is where they keep the local stuff. But no. Sadly, it’s also a scam. Let’s zoom in on some of the shelf tags. 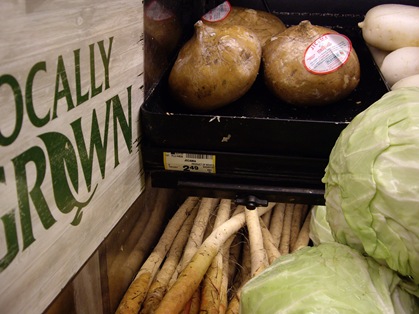 Check out the shelf tag on the cabbage: 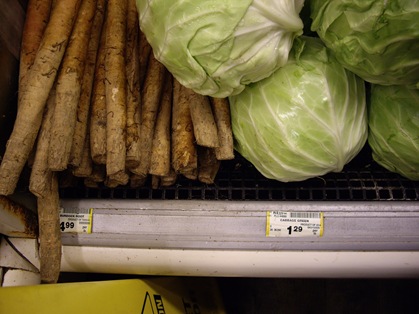 The cabbage is “Product of the USA,” it doesn’t say where it was grown.

And as for the jicama, which you can indeed find at local farmers markets:

The jicama isn’t local either. The tag indicates it’s a “product of Mexico.”

Ok, what about the gobo below? 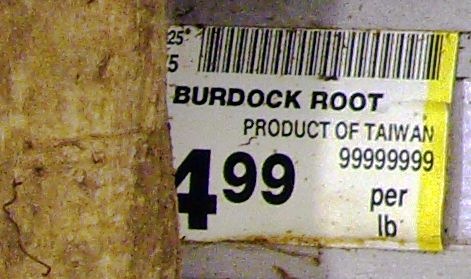 Oops, that’s also not local, it comes from Taiwan.

On the upper shelf is some yama imo:

… which turns out to be grown in Japan.

If you visit the shelves under the Local Growers sign, there are indeed a few things local. Most of the items were not local. The sign is a scam. The whole section is a scam.

So there are a few things besides the training of their security guards that Safeway might answer to.

Some blogs called for boycotting Safeway. That’s not going to happen. But it wouldn’t hurt to put some pressure on this business. Foodland, for example, has made an effort to find and offer local produce. Why can’t Safeway offer more local produce and stop the “local growers” scam? Take down the sign if it isn’t accurate. Earn the respect of shoppers instead of trying to imitate Whole Foods.

And to return to the sandwich incident, Safeway should ensure that its security guards are properly trained. They not only embarrassed themselves, but they put Hawaii in a bad light in the national press.

Rent-a-cops who kidnap a family should be prosecuted for kidnap. It is really that serious.


I think that Safeway must really not train its staff very well at all......my girlfriend was hit on the head by the hood of her car when the Safeway employee accidentally tried to close it on her ---- she needed medical assistance, and was quite dizzy.....the staff there acted like they had no idea what to do. The next day when she returned to find out where the store would like her to be seen, she found that the staff was not 'available' ---- in fact I had to go to the damn store with her to get any real answers. It's been over a year and we are still being given the runaround by the corporate office - who basically told us that they are 'self-insured' - so you have to use your own medical coverage. What do they do when someone is physically insured inside the store and has no medical coverage?