I hope everyone will click over to Damon Tucker’s latest article on the beating he took for photographing Big Island police: A Police Officer Brutalized Me and Arrested Me for Taking Pictures (Pictures of My Body) (damontucker.com, 8/6/2011).

If you would like to see the “aloha spirit” of the Big Island police department, check out the photos of cuts and bruises—all for taking legal photos of the Big Island’s “finest” in action. Plus, of course, the police confiscated Tucker’s cell phone and camera as “evidence.” Evidence of exactly what? Of their own police brutality?

Unfortunately, along with the proliferation of cell phone and video cameras has come a nationwide wave of police misconduct and brutality in an effort to suppress public documentation of their conduct.

Over Memorial Day weekend this past May, residents of Miami Beach witnessed a horrific display of police brutality as 12 cops sprayed Raymond Herisse's car with 100 bullets, killing him. The shooting provoked outrage in the surrounding community, not only because of the murder, but because of what the police did afterward.

Officers on the scene confiscated and smashed witnesses' cell phones; later, when they were confronted by the media, the police denied trying to destroy videos of the incident.

[AlterNet, 15 Years in Prison For Taping the Cops? How Eavesdropping Laws Are Taking Away Our Best Defense Against Police Brutality, 7/27/2011]

The 15 years in prison charge came about from another incident described in the same article. A snip:

Tiawonda Moore from Chicago, Illinois, faces up to 15 years in prison for using her Blackberry to record two Internal Affairs investigators who spoke to her inside police headquarters. She was there last August to file a sexual harassment complaint against another officer, who she alleges had fondled her and left his personal telephone number when he was at her home investigating a domestic dispute. She says the police department actively discouraged her from filing a report, so out of frustration, she began to record the conversations on her phone. Although the case initially received national media coverage, attention has since died down as 21-year-old Moore awaits a trial date that continues to be pushed back.

In another case described in the article, a man was threatened by a police officer dressed in plainclothes and wielding a gun—on a traffic stop. The man had a camera in his motorcycle helmet and posted the video on YouTube. Police responded by raiding his home, confiscating his computer, and charging him with two felonies. He faced 16 years behind bars.

The charges were ultimately dismissed. But what happened to the police officers who threatened this man with a gun, and later raided his home and confiscated his computer? Probably nothing. Police are usually free to repeat their behavior another day.

Yes, in the great state of Illinois. See: 75-Year Prison Sentence for Taping the Police? The Absurd Laws That Criminalize Audio and Video Recording in America (AlterNet, 1/28/2011).

Police seek to avoid accountability for their illegal acts

Police brutality is escalating. This snip is from an article Why Do the Police Have Tanks? The Strange and Dangerous Militarization of the US Police Force (Missing Pieces, 7/6/2011) 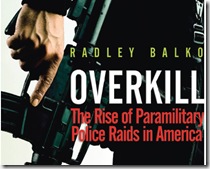 Shockingly, paramilitary raids that mirror the tactics of US soldiers in combat are not uncommon in America. According to an investigation carried out by the Huffington Post’s Radley Balko, America has seen a disturbing militarization of its civilian law enforcement over the last 30 years, along with a dramatic and unsettling rise in the use of paramilitary police units for routine police work.

Videotaping police activities is an important way to hold them accountable and protect the rights of ordinary citizens. Ultimately, the fact that more and more of us have some kind of video or audio recording device with us at all times presents the greatest threat to police violating the law and to police brutality.

As we see in this incident, Hawaii police deserve no exemption from transparency and accountability. We should first of all support Damon Tucker’s right to have taken his photos, and also his right to seek redress from the police for their illegal actions including compensation for bodily injury.

As taxpayers, we might also resist the use of our taxpayer money not only for the illegal acts of police, but for the payment of settlements afterwards. There is little disincentive for police brutality if there is no cost to them. In effect, we “bail them out” by letting our wallets be picked to pay for the legal costs and settlements that result from their actions. This leaves them free to do it again, and again, without consequences.

Sounds like the police higher ups are fans of Republican TV (Fox News). They are beginning to believe the new conservative mantra that a subservient populace is a responsible populace. Pretty weird because this would make old school conservatives like Dwight D. Eisenhower turn over in their graves.


i think we all miss the days that the biggest indiscretion of Big Island police was fathering illegitimate children on their beat of vast stretches of seemingly endless highways quietly cutting through forests, lava rock, ranches and cane fields.