Earlier this month, U.S. Sen. Daniel Akaka, D-Hawaii, introduced a bill that would restore federal Medicaid eligibility for Pacific migrants that had been stripped in a 1996 federal welfare reform law.
…
“Hawaii has deep compassion and aloha for our brothers and sisters across the Pacific. I call on the federal government to make good on its commitments”

But the Abercrombie administration is not demonstrating “aloha for our brothers and sisters” from Micronesia living in Hawaii—in fact, it is continuing a Lingle policy of denying them life-saving medical services that reportedly has already resulted in numerous deaths. How? It is continuing the appeal of a lawsuit that won back their services.

Indeed, there has been no “New Day” for Micronesians and other COFA (Compact of Free Association) residents of Hawaii under the Abercrombie administration. Lawyers continue to battle the state in federal court to prevent cutoff of medical services. If “aloha to our brothers and sisters” is re-established, it will be thanks to federal judges,

An amicus brief was filed on Tuesday (8/9/2011) opposing the Abercrombie administration by the Japanese America Citizens League-Honolulu Chapter, The National Association for the Advancement of Colored People-Honolulu Branch, and Kokua Kalihi Valley that demonstrates true aloha. I have included some excerpts and the full text at the end of this article A quick snip:

The amicus brief notes that the Micronesians are not immigrants but migrants, that the state bears joint responsibility for their care, and moreover, it has accepted federal funds to provide that care. There’s much more in the 40-page document, and I recommend it to those interested in the history of American nuclear policy in the Pacific as well as in the well-being of COFA residents. 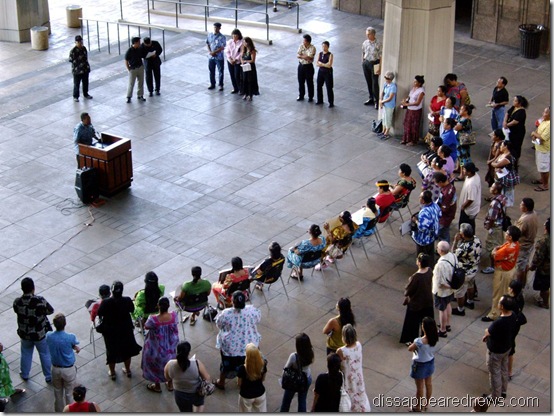 Former governor Linda Lingle tried to create an inferior health plan specifically for COFA residents called Basic Health Hawaii. The new plan did not include critical services such as dialysis or chemotherapy. The death sentence was delivered in a letter that began

Hawaii's economy has slowed. The State Must decrease spending. The health benefits you are receiving from the Department of Human Services (DHS) will end on August 31, 2009.

Imagine reading this if your life depended on receiving dialysis several times a week.

The TRO issued by US District Judge Michael Seabright that prevented the state from cutting off medical services to Micronesians and others was in a related case, ST v. DHS. A snippet from that case:

The Lingle administration, after being enjoined against reducing services to a bare-bones level by Judge Seabright, chose to appeal the Korab decision to the 9th circuit court of appeals. When the new administration came in last year, it did not drop the appeal. So while Abercrombie speaks with such affection of Pacific Island residents of Hawaii, he is still attempting to cut off their medical care.

From the plaintiff’s final brief (included below in full):

On December 13, 2010, Plaintiffs-Appellees (the "Class") obtained a preliminary injunction preventing the State of Hawai`i ("State") from denying health care to people from the Marshall Islands, Palau, and the Federated States of Micronesia solely on the basis of alienage. The State now claims that singling out a class of people who are lawfully residing in Hawai`i was lawful. The State is wrong.

As set forth below, the district court correctly held: (1) the State discriminated against the Class on the basis of alienage; (2) the State's actions are subject to strict scrutiny—not rational basis review; and (3) there is no federally-established "uniform rule" shielding the State's discriminatory actions from legal challenge. The district court's decision should be affirmed.

The state’s final brief in the case is to be filed in San Francisco next week, after which the appeals court may decide the case or perhaps schedule oral arguments. The state can still voluntarily give up its appeal, but shows no signs of doing so.

I’ll snip from two places. The complete document is below.

This part has a bit of history:

The COFA residents who were disenrolled from their State health benefits programs and moved to the Basic Health Hawaii (BHH) plan are not “ordinary” immigrants. In fact, they are not “immigrants” at all. The people transferred to the new (and significantly inadequate) healthcare plan are migrants from three island nations in the Pacific Ocean, the FSM, RMI and Palau. Unlike the usual push-pull factors driving other immigrants to the United States, Micronesians were essentially forced to the U.S. after decades of failed U.S. trusteeship and botched oversight that continued well after the enactment of the 1986 COFA agreements.The Hawai‘i state healthcare struggles represent the failure of the long-stated and self-declared U.S. obligation of promoting and supporting Micronesian independence and self-sufficiency. And the State cuts to life-saving healthcare symbolize the government’s failure to fulfill this obligation.

The Marshallese, in particular, suffered the gravest injustices. For twelve years, from 1946 to 1958, the United States exploded 67 atomic and hydrogen bombs on Bikini and Enewetak atolls. Nine islands were completely or partially vaporized. See Hearing Before the Subcomm. on Asia, the Pacific and the Global Environment of the H. Comm. on Foreign Affairs, 111th Cong. (2010) (statement of Jonathan M. Weisgall, Legal Counsel for the People of Bikini), at 3-4 (“Weisgall testimony”). The most powerful test was “Bravo,” a fifteen megaton device – equivalent to 1,000 Hiroshima bombs – detonated in 1954 at Bikini atoll that threw radioactive fallout over nearly 50,000 square miles. Id. at 2; Nuclear Claims Tribunal, Republic of the Marshall Islands, http://www.nuclearclaimstribunal.com (last visited Jul. 29, 2011) (“Nuclear Claims Tribunal”). Radioactive ash fell on other Northern atolls, including Rongelap and Utrik, where it entered the islanders’ lungs, stuck to the coconut oil on their skin, and was played with and ingested by children. Holly M. Barker, Bravo for the Marshallese: Regaining Control in a Post--uclear, Post-Colonial World 21 (2004). At the time, the Marshall Islands were part of a United Nations Trust Territory administered by the United States, which, as sole trustee, “had pledged to the United Nations to ‘protect the inhabitants against the loss of their land and resources.’” Weisgall testimony, supra at 3.

Horrific health effects, including thyroid and other cancers, are linked directly to the nuclear testing program.

This next snip has some more background and a little on the legal case the organizations are trying to make.

As trustee for the Trust Territory of the Pacific Islands, the United States in the late 1940s and 1950s lethally pursued its own interest by testing nuclear bombs on select Pacific islands, devastating not only the Marshallese homelands but also the health of the Marshallese and Micronesian people for ensuing decades. The U.S. also breached its acknowledged trust duty by failing to promote Micronesian self-sufficiency and independence and, instead, by fostering economic and healthcare dependency on the U.S. in order to secure Micronesian acquiescence to continued U.S. military and nuclear presence on the islands. One consequence of these breaches: the need of Micronesians to migrate to Hawai‘i and elsewhere in search of desperately needed health care for severe medical conditions.2 This brief uses “Micronesian,” “COFA residents” or “COFA migrants” to include all COFA nation migrants, including peoples from the FSM, RMI and Palau. It also focuses primarily on the FSM and RMI; while Palauans are also affected by the State’s actions, there are fewer Palauans impacted by the issues addressed.

In recognition of these injustices, as part of its Compacts of Free Association (COFA) with the Micronesian governments in 1986, the United States committed to repair the persisting damage, including allowing Micronesian people to “establish residence” in Hawaiʻi and other states and territories “as nonimmigrants.” And many have traveled to these places to receive, among other things, needed medical care. But in 1996 the U.S. perpetuated the injustices by terminating Medicaid funding for Micronesian people.

The State of Hawai‘i, as a constituent member of the U.S., bears joint responsibility for Micronesians in Hawaiʻi (who are not immigrants) for often life-or-death medical care. The State’s responsibility stands on two legs.

First, the State’s responsibility lies in its acceptance of federal funds partially for Micronesian health care as part of the United States’ justice commitment to the Micronesian people. To its credit, when the federal government terminated Medicaid coverage for Micronesian people, the State initially stepped up to assure the promised and needed medical care. Hawai‘I received over $74 million since 2003 in part as compensation for costs of health care for Micronesians. It continues to receive federal funds (even though those funds do not fully cover health costs). Like most of the rest of us, many Micronesians in Hawai‘i pay State taxes and productively contribute to the State’s economy. The State thus bears joint responsibility to provide a meaningful level of health care coverage, particularly for those with life-threatening cancer, advanced diabetes, kidney failure and heart disease. More specifically, and directly relevant to the instant case, the State bears the responsibility not to exclude Micronesian migrants – and only Micronesian migrants – from needed health care coverage in HawaiʻI.

Second, the moral grounding for the State’s joint responsibility to Micronesians lies in the State’s commitment through law to the idea that “each person is important to every other person for [our] collective existence.” See Haw.Rev. Stat. § 5-7.5 (a), (b) (2010). That commitment emerges out of the Hawaii legislature’s directive to judges, legislators and government administrators that “[i]n exercising their power on behalf of the people and in fulfillment of their responsibilities” they contemplate the idea of “Aloha” and act to promote “the essence of relationships in which each person is important to every other person for collective existence.” Id. Hawaiʻi law thus instructs decisionmakers to embrace the value that our “collective existence” as an island community depends upon our fair treatment of “each person” among us. And this applies with force to Micronesians in Hawai‘i seeking badly needed medical care that is partly attributable to acknowledged injustice.

Not good, not good at all. Is Abercrombie hellbent on pulling an "Obama"?