Exactly how could New York City be evacuated if Indian Point blew?

That was the question briefly asked on this morning’s Democracy Now. The brief answer was that 20 million people could not be evacuated. And where would you put them? 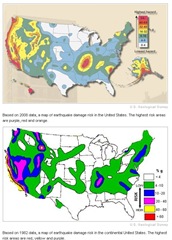 The Indian Point reactor is considered to be at the highest risk of earthquake damage of any in the US.

The reactor with the highest risk rating is 24 miles north of New York City, in the village of Buchanan, N.Y., at the Indian Point Energy Center. There, on the east bank of the Hudson, Indian Point nuclear reactor No. 3 has the highest risk of earthquake damage in the country, according to new NRC risk estimates provided to msnbc.com.

As we have been painfully reminded, nuclear disasters anywhere in the world can be threatening. At present, the economy of Hawaii teeters on whether or not increased radioactivity from Japan’s earthquake-caused nuclear disaster might send toxic clouds this way. The west coast of the USA is similarly anxious. 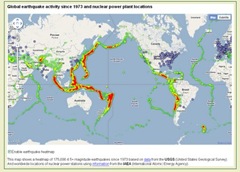 A map useful in understanding the vulnerability of nuclear power plants to earthquakes has been put together by the Mapperz blog: Earthquake Activity & Nuclear Power Stations. Click on their map for a larger, interactive map that you can explore.