Holaniku, a concentrated solar power (CSP) plant built by Sopogy and is operating at the National Energy Laboratory of Hawaii Authority (NELHA) in Kailua-Kona. The 2MW system costing $20M went on-line in 2009.

The Holaniku facility is located on 4 acres. Solar panels concentrate sunlight onto a tube containing a working fluid (mineral oil) which is heated and stored in thermal tanks. The heated oil can be turned into electricity. 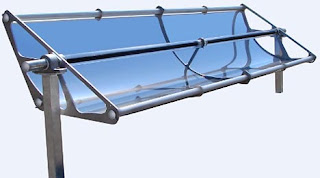 “The machine uses a closed-loop Organic Rankine Cycle (ORC) to create pressure by boiling chemical working fluids into vapour. The vapour expands and moves in a one-way closed pipe system causing pressure to turn the twin screw expander, which drives a generator to produce clean electricity. The gas is cooled and condensed back into liquid in the condenser.”

Some former Sopogy employees are questioning the effectiveness of Sopogy's systems.

In electrical engineering classes at Seattle University students are taught the “Fundamental operating premise: Concentrated Solar Power (CSP) allows for higher quality energy to be converted due to the higher operating temperature of the heat engine”


The use of Concentrated Solar Power can solve a major problem in Hawai`i.

Hawaii’s peak energy use occurs in the evening after the sun has set. If renewable energy systems cannot offset the evening peak, then the utility must maintain all of its fossil fuel generators to operate them inefficiently for a few hours a day.

This peak evening energy use cannot be dealt with using traditional photovoltaic or wind resources. A solar-electric (photovoltaic) panel is most effective during peak sunshine hours. Wind is strong in the morning but tends to die down in the evening.

CSP appears to be able to provide power during this evening peak.

Darren has reinvigorated the energy industry in Hawai`i. He was born in Hilo and began his energy career in 1989 working at his family’s electrical contracting business as an electrician, project manager and Vice President. In these roles he had the opportunity to work on a variety of projects including the construction of the National Astronomical Observatory of Japan on Mauna Kea, the Subaru Astronomical Support Facility and energy efficiency upgrades at the State of Hawaii Airports. He created his first company in 1994, now called Energy Industries. Over the years he and his companies have won numerous awards. Over his career he created several companies which he grew internationally, led teams with several hundred employees and grew his businesses to multi-million dollar success.

This year I asked Sopogy about their use of Micro CSP.

“MicroCSP is a member of the concentrating solar power technology family that has been reengineered for installation in smaller, modular projects. In this technology we use trackers to follow the sun, reflectors and optics that concentrate and intensify the thermal energy from the sun into a heat transfer fluid. That fluid is passed through a turbine to create power. We also have thermal storage to buffer clouds and produce power at night.”


How has MicroCSP changed the CSP industry?

“CSP has been typically used in large power projects, generally over 100MW in size. MicroCSP is designed for projects between 1-50MWs. This has brought the low cost economics of CSP to the distributed generation market.”


Why have you chosen to build a 5 MW CSP facility in Kalaeloa?

“Kalaeloa is located on the very dry and hot West Side of Oahu - not only is it ideally situated near the high transmission corridor so we can easily tap into and send our energy into the island grid, but it is also growing.”

What are challenges and opportunities for O`ahu-based CSP?

“Bringing the first large scale solar project to Oahu is a challenge. While we built the world’s first MicroCSP power project in Kona back in 2008, the technology is still relatively new to Hawaii so we’re having to work extra hard with our engineers and contractors to ensure we can price the system right and install it quickly. Once we demonstrate the technology, we see the potential for many copy/paste installations across Oahu. We will be putting hundreds of local laborers to work, gaining skills which can be utilized in future projects in and out of Hawaii - this is exciting for Hawaii and Sopogy.”

What challenges and opportunities exist regarding Sopogy's Chinese deal?

“In its current design, this would be 200 Megawatts or roughly 2x the size of the Big Island’s energy load. This would be Sopogy’s largest deployment of solar collectors in the world and managing that volume will be a challenge. China is growing quickly and they are looking to install clean energy solutions. Once we can effectively demonstrate the scalability of our technology and set-up manufacturing for this project, we will become one of the largest solar companies in the World.”

How will your company deal with the changing financial climate?

“We are strategically selling our products in the US, Latin America, Europe, Sout Asia and Oceania now. This enables us to diversify our risk and exposure. We recently hired a new CFO, Michael Loo, and have been assembling a blue chip financial team including Layne Yoshida our Controller and Ken Shimada our Director for Energy Economics. Between these individuals and their teams, we have a combined 80 years and $10 billion in financial management experiences.”


Recently the Hawai`i Public Utilities Commission (PUC) authorized a program where ratepayers can install on-site solar, wind and hydro facilities and be paid to deliver electricity to the electric utility grid. The rates paid to home/business renewable energy facilities are the same for each island within the three counties under the control of HECO and its subsidiaries MECO and HELCO.


These higher prices for CSP reflect the higher costs for the systems. But look at it from the non-renewable energy owning ratepayer. Both systems supply solar electricity to the grid but one has costs that are significantly higher. It is worthwhile if the higher cost electricity is generated in the evening offsetting the peak load (demand).


I asked about the evening peak.


How much energy can be transferred from day to evening?

“Technically, we can store enough energy to operate 24/7 but practically, we’d look at 1-hour storage to address the late afternoon peak.”


There are other benefits of CSP. Solar electric power output fluctuates as clouds pass by. CSP uses solar thermal fluids to maintain a relatively constant output.

sopogy's original project was for 3 MW. it was downsized to a mere 500 kw. it currently generates and has installed only 100 kw. it is not the panacea that mr. curtis pretends it to be. the original plan fell far short of the hype.

Which increases the cost per watt to $200/watt.

The instructional data linked to in the post is accurate. Efficiency is a factor of concentration ratio and temperature. Smaller the panel = lower the concentration ratio = lower efficiency. It's well documented, and has been understood and tested for decades. There is no special sauce magically making smaller panels more efficient.

As for the storage issue - Holaniku does *not* store thermal fluid. The fluid would need fantastically expensive stainless storage vessels, as well as special systems to prevent oxygenation of the fluid. Holaniku heat exchanges to water for storage - meaning that the highest temperature actually processed by the engines is no higher than boiling water, a further reduction in temperature and efficiency. And while the site might 'operate' off storage, nowhere does it say at what level the plant will run at. And keeping that storage 100% filled for the evening means not using it during the day to run through cloudy periods, or in the afternoon to offset the reduced sunlight as the sun is not directly overhead.

If Holaniku is $200/watt, can we really expect Kalaeloa to be under $50/watt with an hour of storage? Under $20/watt? Where is the point that it no longer makes sense to subsidize these projects when there are alternatives, even in the CSP space, that are less expensive and make documented, tested output?

This is a case of a light bulb salesman conning the state of Hawaii of precious tax payer money which could have been better used in our schools !