Some areas of Makiki lost wireline telephone service on Sunday (12/19/2010) and were told by Hawaiian Telcom that service won’t be restored until likely January 3, 2011.

That’s more than two weeks. Many older folks don’t have cellphones, they are now out-of-touch. And their families won’t be able to reach them over the Christmas or New Year’s holidays.

And for those of us still hesitant to give up our landlines even though we do have as many as one cell phone per family member, it is often because the landline is supposed to be there for us in case of emergency.

It may not be inevitable that phones go out when it rains. Although this is an old story, I’ll tell it anyway.

When we lived in Manoa the phone would go out pretty much any time it rained a bit more than usual. After the rain stopped, a little while later the phones came crackling back. It wasn’t just us, it was our neighbors in the area also. It was also pretty easy to see what was happening.

The phone line junction box was nearby, under the street, near a curb. We’d see repair trucks parked there fairly often. I moseyed over a couple of times to watch what was going on. Craftsmen were usually testing at a junction box to see if they could find an unused pair of wires that worked, to switch someone onto.  The pair that didn’t work was just left there, of course.

The junction box was encased in a rubber boot. It was kind of, well, rotten. Yet it was never replaced. So when it rained, someone else’s line would get wet.

One day our phone line was out for some time after a heavy rain. The nice repair people at 611 (and it’s not their fault) told me it would be more than a week before someone could come to my house. Oh, and if something turned out to be defective in my house wiring, it would cost me something. I pointed out that our neighbors were also affected, it wouldn’t be anything in my house. Nevermind. I would have to pay if it were my fault.

The day came and I wouldn’t let the repair crew into my house. Instead, I walked them down the street and pointed to the junction box.  They did open it, and it was still wet inside that rotten old rubber boot.

This time they did a lot of work, and in the end there was a new junction box with a shiny new boot.

End of my story.

It’s just too easy to blame it on the rain. In Hawaii, it rains. We need to have telephone service even (or especially) when it rains. It could be an emergency.

There’s no information on the outage that I could find on the Hawaiian Telcom website. Just cheery breaking news like this: 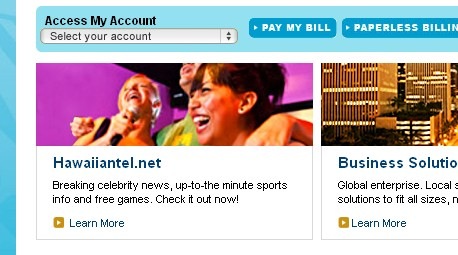 I did contact Hawaiian Telcom for a statement. Here is what I received:

Hawaiian Telcom crews are working hard to address all customer issues as soon as possible.  The prolonged wet weather caused water to seep into our cables, in some cases short-circuiting them, which requires replacement or enough time to dry completely.  As a result, service may be impacted, varying from issues such as static on the line to being out of service.

All available resources are working extended hours, which include 10- to 12-hour shifts, 7 days a week, to address customer issues.  Hawaiian Telcom crews are scheduled to work on Christmas Eve and Christmas Day, and technicians from the Neighbor Islands have also been brought into help assist with repair efforts.

Hawaiian Telcom is sorry for any inconvenience being experienced by our customers and thanks them for their patience.  Customers who are experiencing problems with their service or have questions should call Hawaiian Telcom’s 24-Hour Repair Center at 611.

I know that they are doing their best to restore service. And everyone I spoke with was polite and helpful. Still, I wonder if we should know more about how this vital communications system is being maintained.

Are they keeping their boots dry, for example? How exactly does water seep into a waterproof cable?

There is some disappeared news in this story yet to be revealed.

How does this fit in with Hawaiiantel's new slogan "Always On?"


Old telephone cables consists of hundreds of copper wires with paper insulation bundled into a watertight tube. However, keeping something perfectly watertight is a problem and moisture on paper is an electrical disaster. This has been a problem with telephone cables since the 1900's. However, from about twenty years ago some phone companies have been using sophisticated humidity sensing computer controlled systems to pump dry compressed air into the cables to keep moisture out and to dry the paper. The system is somewhat expensive. I wonder if Hawaiian Telcom has upgraded their cables as other phone companies have.


Thank you for mentioning this. I know they did not use anything like it in that hole in the ground in Manoa. I'll ask about Makiki.