EPA says it will take action on chromium-6 tainted water. But should we wait? 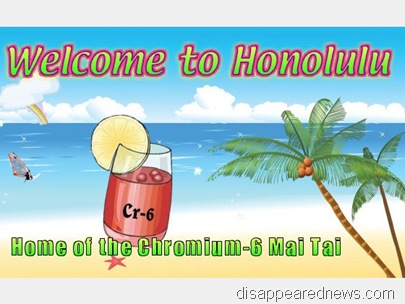 EPA Administrator Lisa P. Jackson said she was troubled by the prevalence of the chemical hexavalent chromium, also known as chromium 6.

Jackson detailed a series of actions to be taken by the EPA, including working with state and local officials to determine how widespread the contaminant is and issuing guidance to all water systems on how to test for the carcinogen.

Jackson said the agency will likely tighten standards based on a draft chromium 6 risk assessment the agency released in September that is expected to be finalized next year.   [The Daily Reporter (AP), EPA chief says agency will deal with tainted water, 12/23/2010]

The article notes that it is surprising that the EPA took up the issue so soon, in the middle of a busy session and with the holidays coming up. Still, it looks like the fix is quite some time away. Couldn’t Honolulu look into this problem on its own? No need to wait for the EPA. This sounds like something the Department of Health should get on top of right away.

Studies show that chromium 6 can cause cancer in people and has also been found to cause damage to the gastrointestinal tract, lymph nodes and liver of animals.

I just find it extremely difficult to believe that only now this is ʻnoticedʻ.
I think they must have known about for a long time.
Was it because of the plantations? Maybe thatʻs why itʻs been buried. Because who owns all that land now? The SAME people.