Flooding makes headlines, technology that could fix it, not yet 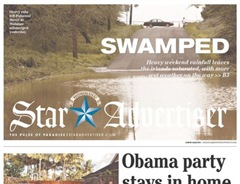 Today’s Star-Advertiser front page is topped with a photo of a flooded road. If you’ve been following along, you know that there are pavement surfaces that allow water to drain through and into the ground.

Some areas are not suitable, but has Hawaii looked into which are? The porous or permeable asphalt costs no more than regular asphalt, according to manufacturers’ promos, although the roadbed underneath may cost a little more. It’s made up by not needing pipes to carry storm water into rivers, streams and the ocean. For access roads and parking lots, the use of porous materials is well-established. The road pictured looks like a candidate.

A California website indicates that porous pavements have been in use for more than 25 years (in California maybe!). Their highway specs include references to the material. This paragraph introduces some of the common abbreviations:

Porous asphalt pavement is commonly known as open graded asphalt concrete (OGAC), open graded friction course (OGFC), and permeable asphalt.  OGAC/OGFC has been used by state DOTs and local agencies since the 1930's.  Most highways constructed in Northern California use OGAC as a final wearing course.  The permeable mix allows water to flow through the pavement and drain out the sides.  This significantly reduces splash/spray from vehicle traffic and reduces glare from daylight or headlights.  Another benefit of OGAC when used on highways is a reduction in vehicle noise.

And yes, there is a great reduction in noise for some pavement types, particularly those that include rubber particles reclaimed from old tires. The surfaces described above do not necessarily include a sub-surface that allows the water to drain right into the soil, but instead the water can run out the sides.

Here’s a California specification for paving work that includes these abbreviations. Believe me, unless you are a highway engineer you probably don’t want to read this. I include it just in case someone in our state or city departments of transportation gets hold of this article.

There are all kinds of pavement surfaces. Some reduce noise and also reduce splash and accumulated water. Others, the kind I’m interested in, allow the water to drain away without polluting our stream or the ocean. They can’t be used everywhere, but surely the flooding we experience in Honolulu should push us to use these materials where we can. And how can we clean up Honolulu’s streams if we keep dumping runoff and storm water into them?

Highways can be covered with an upper layer of porous asphalt to not only reduce noise but increase safety. This snip is from the definitive book on the subject, Porous Pavements by Bruce K. Ferguson:

The resistance of almost any pavement surface to skidding of vehicles comes mostly from the numerous small edges of aggregate particles in the pavement material (Croney and Croney, 1998, pp. 471–478). Both dense pavements and corresponding porous pavements possess that kind of friction when they are dry.

However, in wet weather a film of water over a dense pavement’s surface inhibits the firm contact of tires with the surface. A dense pavement can be particularly slippery in the first minutes of a rain event (Croney and Croney, 1998, pp. 474–475) because the lubricants that vehicles drop onto pavement surfaces in the days or weeks before the rain combine with water in a sheet of water and oil that simultaneously relaxes the tires’ contact with the pavement and adds a layer of lubricant (the lubricants are the same petroleum products that show up as “first-flush” pollutants when surface runoff carries them into streams).

Porous pavements remove water and oil from the surface directly downward through their pores, preventing surface accumulation. The same pores are pressure-relief channels where any ponded water escapes from beneath vehicle tires, keeping the tires in contact with the surface (Diniz, 1980, p. 5). Figure 1.16 shows the resulting contrast in friction between porous and dense materials. When wet, the friction coefficient of dense asphalt collapses to only one fourth of its dry-weather value, while porous asphalt retains its dry-weather friction value.

In wet conditions porous pavements also improve driving visibility. With no layer of water over the pavement, vehicles do not kick up plumes of mist from their wheels. The pavement itself is more visible because of the absence of puddled water. At night, well-drained pavements produce little glare from vehicle lights.

For these reasons the state highway departments in Georgia, Oregon, and other states place porous asphalt overlays on their major highways. In wet weather the porous surfaces improve driving comfort and reduce accidents. In effect, by improving traffic flow, they increase the capacity of highways without the expense of widening the roads.

You can see some of this in the fourth video posted in my earlier article.

For off-road uses there are also paving blocks for driveways and even for grassy areas that let the water through. Shopping malls and all new developments can be required to handle their own storm water by statute, which they can easily do in a variety of ways. We can close up those storm drains that dump garbage into the ocean. We can save on pipes, construction and maintenance by not picking up storm water in the first place.