Flooding should push Honolulu to use modern porous paving technologies

I’m going to show you something interesting in this article. Something I don’t think you’ve ever seen in Honolulu, but which is used on the Mainland and elsewhere. There are some amazing videos that may surprise you.

Did you see the pictures of flooding on Oahu on TV or in this morning’s newspaper?

Oahu will remain under a flash-flood watch through this afternoon following a rain-soaked Sunday that saw a storm-related fire knock out power to parts of Ala Moana Center on the last shopping weekend before Christmas, the closure of the Honolulu Zoo and City Hall, an overwhelmed sewer system that burst manhole covers and wrong-way drivers trying to avoid flooded streets.   [Star-Advertiser, Rain wreaks havoc across Oahu, 12/20/2010]

There are some key words here: “an overwhelmed sewer system .”

Where does all the water you see in the pictures come from? From everywhere. The City of Honolulu has made itself the collector of everyone’s storm water. And the sewer system can’t handle it today, or ever.

We are once again behind on the technology. Many other states, including New York, Georgia and some Southern states (where frost heave is not a problem) have mandated that new developments and projects take care of their own storm water and runoff. That’s right. A shopping mall in one of those states can’t pass its storm water off to the city to dispose of. 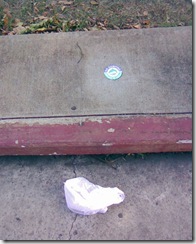 This is a storm drain at Kapiolani Community College. The thing in front is a plastic bag that blew over from one of the farmers market vendors. On the sidewalk is one of those medallions that says something like “Don’t dump here, goes to ocean.” I grabbed the bag, but plenty like it found their way into storm drains all over the parking lot that day—and the City dutifully carried them to the ocean.

That’s wrong, wrong, wrong. KCC can take care of its own runoff, no water at all has to go to the ocean. We don’t have to pay for expensive sewers to take that water away from them.

They can use porous asphalt, porous concrete, or other systems to let their storm water drain right into the earth below their parking lots.

The examples below show how it’s done. I’ll pick up the topic again in a future article.

Honolulu could make good use of this technology. It’s well-established, environmentally beneficial, and fiscally responsible. Who says we have to take everyone’s storm water and build expensive sewer systems to carry it away and pollute streams or the ocean?

Although I’ve featured porous asphalt here, there are other solutions, including paving blocks with gaps between them, and the use of swales or bioswales. I’ll cover those in the followup article.

If picture is worth a thousand words, these videos must be worth 10,000 each.. If you don’t watch all of them, at least please watch the first and fourth.

I love this next one. Would we have seen the flood pictures in today’s paper if we used some of this paving material?

Manufacturers of these paving products love to show off their garden hose pictures. They are very convincing sales tools.

The asphalt material is similar to regular asphalt but without the fine aggregate. Underneath, the roadbed has to be appropriate also. More on that in the followup article, or you can Google for the details.

If you were affected by the weekend flooding, why not get hold of your city councilperson and ask why Honolulu is not making use of these technologies to avoid flooding and the expense of building and maintaining storm water sewers?