A postcard from Honolulu 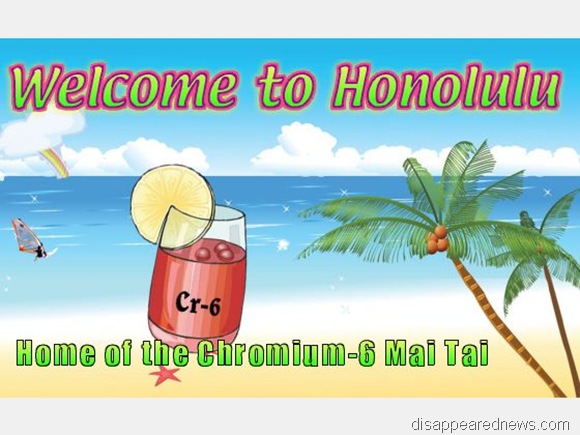 It’s really rare when Honolulu makes the headlines on Democracy Now, as it did this morning.

A new study by the Environmental Working Group has detected a probable carcinogen, hexavalent chromium, in tap water in 31 of 35 American cities. The highest levels were in Norman, Oklahoma; Honolulu, Hawaii; and Riverside, California. The chemical, hexavalent chromium, got public attention in the 2000 film Erin Brockovich and has been found to cause cancer in laboratory animals.

Not the best publicity, unfortunately.

I faxed Gary Gill over at the Department of Health for reaction yesterday. Let’s see what DOH has to say about this hexavalent chromium issue and what they plan to do about it.

What are your thoughts on this?

At 2ppb, Honolulu is 1/50th of the current US EPA legal limit. Unless the Obama EPA acts on behalf of trial lawyers, the Hawaii Legislature will have to establish a limit lower than 2ppb for Brockovich to have an opportunity to extract millions from the City, but that would be very unprofitable for the corporatist State since much of the money would be exported to California. To make money from this, Legislators and lawyers could decide to blame any Hawaii business which has ever touched stainless steel and extract the money from them, but that would mostly redistribute local money unless insurers could be forced to bear the burden. Another avenue for profit would be to blame the military and use this as a basis to prepare to scam a billion or two from Congress the next time Democrats take over.

It is critical not to acknowledge that Honolulu’s chromium comes from natural mineral content of groundwater. If anyone admits this truth, the basis for multi-million dollar litigation disappears. Remember: Loose lips sink suits.

The EPA is being asked to create a new standard. Its current standard is (if I remember the article) a decade or so old.

Now, just because something occurs naturally in our groundwater doesn't mean it is good for us. As to "Maoist monstrosity", I recall Mao has been dead a while. Some people are just not with it.

This will have to be sorted out. Since Honolulu is so blessed with an abundance of this natural carcinogen, we would seem to have an interest in following the issue, and if the stuff is harmful, getting it out of our drinking water.

If only we could do the same about poisonous rhetoric.


So, Anonymous : 10:18 PM HST, just what did you say and where the are you going with it?
MAYBE I SHOULD ALSO ASK, WHERE ARE YOU COMING FROM?

I wonder if any particular type of water filter can remove this?


I had the same thought, because we use a Brita water filter. I went to their website and could not find mention of chromium, nor is it listed on the box of filters. I still need to call or email them to find out. The other popular brand is Pur, I think. Reverse osmosis may be effective, but that's used in homes and is a big deal and expensive.


I felt anger and betrayal at the thought of such substance in the water. Isn't the water regularly tested?


This seems to be a bit complicated. For example, the EPA standard is so high, maybe the rules don't require them to report. At this point, I really don't know who is supposed to do what.


Ever noticed after we find stuff in our drinking water that may be harmful to our kids is when conservative small government deregulation activist begin to shout "what is the government doing about this!"