Followup to Hawaii’s culture of neglect

This is a bit of a rant, with pictures. I know I might be overdoing this a bit, but where else will this be discussed?

After posting yesterday’s article, Banana Republic: Hawaii’s neglect can cost lives (10/31/2010), I had a few more thoughts that I might have included in the original article.

Hawaii’s culture of no maintenance, let it rot, is very pervasive. There are plenty of examples. Back in October, 2008 I posted this picture of the solar water heating on the rooftops of Mayor Wright public housing. I didn’t know it at the time, but the system wasn’t working. Yup, it has not been maintained. See: Housing residents plead for hot water (Star-Advertiser, 10/23/2010)

You may also remember the debacle back in 2007 at the state-owned Kalakaua Homes public housing project:

Nine of 35 elevators in several public housing projects — nearly 25 percent — have been out of service for months, resulting in long waits for elderly and disabled tenants and creating serious health and safety dangers at the facilities. [Honolulu Advertiser, Elevator parts are available after all, 6/20/2007]

Even after publicity forced the state to face up to its neglect, it claimed that repairs could not be made because of lack of parts. Investigative reporter Jim Dooley (see above article) just picked up his phone and located some parts for them. Piece of cake. For Jim Dooley, no thanks to the state. 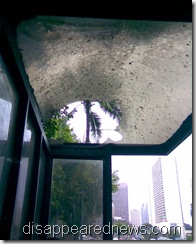 And here is one of my favorite pics. You remember, the bus shelter with the busted roof. Those waiting for buses get rained on. And the water is filthy. It’s been like that for years. This picture is from 2008. I should get a fresh one, because the shelter is now covered with multi-colored graffiti and is even more of an eyesore. 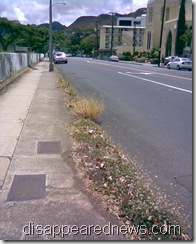 Sidewalks like this can be found not far from the city center. This one was actually cleaned up after I posted the picture. I should go back and check. There are more like it.

With a little maintenance a very expensive sidewalk repair could be avoided. 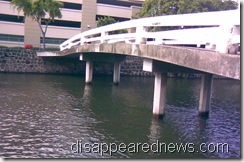 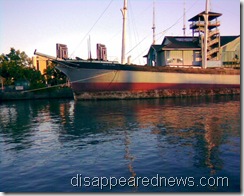 Nor is the no-maintenance culture limited to city or state government. Here’s a very sad picture of the Falls of Clyde, sitting near the Aloha Tower Marketplace and very visible to tourists. If you know and love tall ships, the condition of the Falls of Clyde can make you cry.

The masts and rigging have been removed. It’s rusting. Rotting bulkheads have to be fixed or replaced.

“… a ship is like a house — it falls into disrepair if not maintained, and repairs are more expensive the longer they're neglected. The work now being done on the ship is the first in about two decades, and the ship was last in dry dock in 1981.”

My pic was from 2008. Check it out in the harbor today. The neglect has been extreme and will be hard to remediate.

More recently, a proposed 48% rent increase at privately-managed Keola Hoonanea housing hit the news. It should have been obvious to the management that residents, primarily elderly and many with disabilities, could not pay the increase. Had the property been maintained over the years, such a shocking demand would not even have been contemplated. The proposed increase was unrealistic anyway since residents couldn’t pay it. They organized and got it rescinded. Now what?

There are certainly more examples of this culture of neglect. We should work to reverse it. There are many examples of properties that are well-maintained over the years. It pays off.

Hawaii can do it. My suggestion is to get after the new governor and mayor, get them to do a needs assessment and put together a realistic budget to keep our island in shape.

Oh, one last thought. Keeping infrastructure in good repair in difficult economic times is not easy, but it’s not rocket science either. The state is planning a $200,000 - $500,000 investment in making Hawaii a launching point for space tourism. Whether or not you believe that can actually happen (it’s starting already in New Mexico, not here), who would want to risk their lives believing that the launch facility will be properly maintained? Couldn’t that money be used to create ongoing programs of sound infrastructure maintenance?

Update: Darn, there’s so much… I did forget neglect of dams. You’ll remember that seven people were killed… well, this is from Joan Conrow’s article posted yesterday:

Speaking of which, I had intended to mention when I wrote my last post on the new safety rules for dams and reservoirs that in researching that story, the state guys told me that every dam in the state has some sort of deficiency that needs to be corrected.

So when are they going to fix the dams?

And for some neglect that isn't so obvious, at least yet, how about the onslaught of invasive species that we can expect to see over the next decade. Dan Nakaso's 10/28/10 article (http://www.staradvertiser.com/news/20101028_Admired_ag_inspector_turns_in_his_badge.html#) about a retiring chief agriculture inspector had these chilling details:

"The past 18 months at the department have been particularly rough on Cravalho, who oversaw the layoffs of 26 of 97 positions across the islands beginning in August 2009. The cutbacks including eliminating the department’s 30-year-old canine enforcement program that had been centered on eight tourist-friendly beagles.
...
"The Legislature last session approved money to rehire 22 inspectors. But the funds have not been released and no one has been rehired."

I have read that even before the layoffs, a new invasive species was getting established in Hawaii every week. Although it's usually the noisy (coqui frog) or painful (little fire ant, stinging nettle caterpillar) that get the headlines, there are many others whose impact will eventually be felt, particularly for the ag industry.


Oh darn! Just think - all of us on outer islands are pretty much missing out on all those new alien species because those stupid protesters stopping the Superferry.


Thanks. I forgot about that one.

The state didn't inspect for Varoa mites near the ports, either, as I recall. Not sure what happened with that one (bees).


We don't need the Superferry to spread invasive species to the neighbor islands. There's already plenty of opportunities for them with current modes of transportation.

As for the varroa mite, state inspectors looked for it around the Hilo airport, searching for wild bee colonies that could be infested, but that was after it was already established. Like so many invasive pests – future biocontrols notwithstanding – I fear it's already past the point of no return.