Check out today’s story in the Star-Advertiser on the lack of emergency warning sirens. A snip:

In 2006, State Civil Defense did an analysis and identified 148 sites statewide where no warning sirens exist -- 63 on the Big Island. The state found another 119 older sirens needing to be upgraded or replaced. That's 267 total.

Sure, money is tight these days, but Civil Defense neglected to install sirens when the state had a bulging surplus.

Read on. The state will install sirens according to the following priorities:

The state plans to build according to the following priority order:

“Existing sirens in tsunami zones that have fallen or are falling off the pole”??? In 2006 we didn’t have language for this. Now we do. WTF??

We’ve harped on the lack-of-maintenance culture that pervades the state and at least Honolulu city and county. Whether it’s sirens, sidewalk potholes, busted bus shelters, lack of safety paint on roads, inspection of rats in Chinatown, pieces of bridges falling into the river, whatever, the guiding philosophy of government seems to be “let it rot” as long as it can. Let’s throw in the complaint often heard that people have to die before a traffic light is installed (the debate is over exactly how many deaths does it take).

If a siren falls off its pole, how about someone screwing it back on? Hmmm? Is that really so radical for this state?

This blog has been on the sirens case for some time. Occasionally, as today, the newspaper will raise the issue. Yet the Lingle administration, even after the Big Island earthquake, has not managed to remedy the problem and keep us safe. Yes, I know that the sirens were falling off their poles even before Lingle, but the Big Island earthquake debacle should have put the issue on her radar and we shouldn’t be reading about it in the newspaper today.

Let’s face it: the neglect means that people may die.

Another example, a picture you’ve seen a few times already: 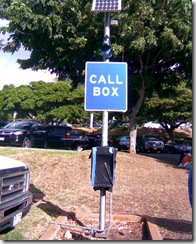 This emergency call box at Kapiolani Community College has been busted for years. It was still busted yesterday when we parked nearby for the farmers market. Security knows about it. It’s never fixed.

Imagine a student walking towards her car at night and notices that she’s being followed. Her instructions are to run not to her car, but to a callbox and get help. So she runs to the blue Call Box sign, with her potential assailant in hot pursuit.  Oops, no phone in the phone box. Oops, she’s raped.

If they can’t fix it, wouldn’t it be better to take it down? As it is, a non-working call box represents a hazard. Yes, someone could be raped, assaulted, etc. And when they sue, taxpayers will pay the settlement, but will KCC fix the phone?

Probably not. No one is individually liable. Same for the sirens. No one will lose their job if a tsunami hits and people are killed because they were not warned.

The state even attempted to hide the areas of the state which would miss out on emergency warnings because they did not have working sirens. From When disaster strikes keep the public in the dark (1/25/2007):

“How does refusing to tell citizens where these gaps exist serve the public good? Families living in a gap area certainly deserve to know about it and that whatever sense of security they have the sirens will alert them in an emergency is false.”

Doug commends the Star-Bulletin for pursuing an information request and obtaining and making public the list. Why was there such a delay in getting the info? Did our civil defense people even know which sirens were working and which not? Just a theory.

This culture can be reversed. Even in hard economic times there are priorities. Safety ought to be high on the list.

Our Banana Republic will soon have a new governor. The city already has a new mayor. Someone should put them to work fixing things.

No Hawaii government big shot retires rich because they made sure stuff got kept clean, maintained or repaired as needed. They get rich off kickbacks from huge contracts ... new buildings, big road jobs, trains. Better to let it all fall apart so you have to have a big new expensive contract sooner. Look at the Hawaii Convention Center as you drive past it. Already looks dirty and unscrubbed. Roof already leaks. it's not old. It cost gazillions. Honolulu Airport is truly Third World ... half the escalators are always busted. Walk into any restroom in any county or state park and you'll wish you hadn't. Go anywhere and come home and marvel at how much better the roads and streets were in whatever place you just visited.

We live in the Slum Islands. Must be part of our culture because it never changes.


What we do without your diligent reporting of the important issues, Larry? Many thanks!


Great comment Larry, now what can we do to effect change?

Call the Mayors hotline until they get tired of hearing it? A group of 100 people harping on similar issues could bring light to focus on an item, then in 3 weeks, pick a new again, and 6 weeks later, go back to the 1st one so that it didn't die off.