Where is the outrage over United Nations failures?

@Jnoubiyeh (Sarah Abddallah) is worth following—both her tweets and her website. She asks the questions the rest of the world should be asking. Helen Thomas would approve. 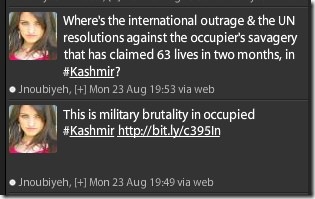 The link in the second tweet is to Another day, another death (Greater Kashmir, 8/24/2010). Just read some of the articles there, if you dare. For example, 26 PERSONS SHOT IN EYES.

We read nothing in our press of what is going on in Kashmir, so we know nothing, and so we do nothing.

It’s more than just a lack of outrage, where is our humanity?

@Jnoubiyeh’s question is a good one. For me, it strikes at the heart of a modern tragedy, the failure of the United Nations to effect peace when nation-states clash. Kashmir, Palestine, Africa. We remain conveniently ignorant of the atrocities and the carnage, and the UN, as our primary international peacemaking body, is ineffective, if not irrelevant.

It’s a privilege to remain so ignorant and let others work on these problems (many of which are funded by our taxes in the form of direct or indirect aid).

Worse, there has been no solution to the atrocities committed by the United Nations itself. In Haiti, rape and abuse by UN troops is a long-standing and unresolved horror for the Haitian people.

Children have been subjected to rape and prostitution by United Nations peacekeepers in Haiti and Liberia, a BBC investigation has found.

Girls have told of regular encounters with soldiers where sex is demanded in return for food or money.

A senior official with the organisation has accepted the claims are credible.

Yes, the date of that article is 2006. This one is dated 8/17/2010, and there are many more recent accounts. The rapes committed by UN peacekeepers continue.

Sadly, the peacekeepers are the criminals, and this organization, intended to bring peace to the world, seems unable to reclaim itself from the dark side.

The UN failed to act against Israel as the massacre of Palestinians progressed day after day after day in the waning weeks of the Bush presidency. The UN still does nothing about the suffering and deaths in Gaza.

Nor does the USA care about atrocities. In fact, no one is doing anything about the civilian deaths caused by our own military. It seems pretty rare for the soldiers or the private contractors to be held accountable for the slaughters that have been documented against them.

Of course there are cries for peace, for compassion, and for humanity in our world. It’s just that powerful governments seem separated from those calls. Powerful governments are lead by powerful people, and it is those people who seem untroubled with causing suffering or death, whether it is by firing pellets at people’s faces in Kashmir, raping Haitian women, or cutting off food stamps and health care right here in our own country. Cutting off health care results in deaths. At every level of government, politicians are responsible for life-and-death decisions.

We, ultimately, are responsible for keeping uncompassionate people in office or for replacing them.

The need to reduce human suffering

I spoke some time ago with Carl F. Stover, one of the founding members of the International Society for Panetics, about reviving the organization, which was intended

… as a medium of exchange for members and others interested in the integrated study of the infliction and reduction of humanly-inflicted suffering. The purpose is to foster the continuing growth of a coherent body of objective knowledge that can help governments, institutions, professions and social groups avert or reduce the human suffering they engender.

Stover passed away earlier this year, and I think that may be the end of the organization. The world could use more panetics thinking, though. What is panetics? From the website:

Panetics is an integrated discipline to study and help reduce the INFLICTION of suffering by humans upon other humans. It was founded upon the conviction that a growing international consensus supports the right of people to be relieved from suffering inflicted by other people when they act through governments, institutions, professions and social groups. To that end, Panetics is an evolving, "pan-ethical" approach to research, policy analysis, decision-making and management."Panetics" is a term coined by Ralph G.H. Siu from "paneti" which means "to inflict" in Pali, the language of the Buddha.

Siu developed a scale to measure suffering. You might say that he quantized compassion. I think the Dalai Lama would approve. Measurement is the first step in decisionmaking and comparative action.

Ralph Siu held that freedom from the infliction of suffering is a human right:

The principal focus of panetics is upon ways to avert or alleviate the infliction of human suffering. Siu argued that, while humans have always suffered from non-human as well as human-engendered causes, in the past century more suffering has been inflicted by humans on humans than derived from non-human sources. Now, freedom from suffering, either willingly or inadvertently inflicted by individuals through governments, institutions, professions, or social groups, is viewed as an attainable human right gaining growing acceptance throughout the world community.

Unfortunately, the UN and world governments are still far from recognizing this proposed human right, but if it were adopted, and if freedom from suffering became a universally shared value, perhaps it would bring along with it some action to reverse the unsatisfactory path we are treading, one that leads to ever greater suffering.

Imagine: if we recognized freedom from suffering as a human right, the US would have to sign on to the land mine treaty, for example. Our usage of land mines brings untold suffering and death, primarily to children.

When we talk about “hope,” I think it is helpful to have something powerful and universal to hope for. There are plenty of candidates, of which the reduction of human suffering is a good one. Beyond hope, though, must be the realization that just hoping is not enough. Of course, I’m thinking of the election of Obama, which crystallized hope in this country and around the world. Then poof, it evaporated. Investing so much hope in a single person is risky.

At least, let’s explore the usefulness of a little outage mixed with the hope, and see if that works to stir up some action. We could use some progress, for example, in reforming the UN, or in recognizing that inflicting suffering will be a crime, whether carried out by UN troops, by Toronto stormtroopers, or by CIA torturers. I’m suggesting that we expand our outrage, hope and action to something beyond just the election of politicians, though that’s also necessary.

Reforming the United Nations could be a useful step in setting world governments on a better path. First thing, though, the UN needs to no longer be part of the problem. I can’t say I’m really hopeful at this point, since crimes committed by the UN seem to continue unchecked, and it’s not clear how to intervene.

Well, I’ve still got my outrage.

The outrage should be focused on the US/Israel/Britain/Micronesia etc vetos of UN resolutions that could make a difference in human lives. Let us face it the US is a big part of the problem. We need to clean up our own Congress/Government policies. Obama has been a hugh disappointment. He has continued the violation of human rights and illegal occupations. How do Hawai'i Congressional people vote? I personally of outraged at the support for Israel, and other corrupt abusive governments.


There are two issues here. Number one there needs to be a better system in which to punish individuals who abuse children. Getting every country who supplies peace keepers to abide by a judicial standard is the challenge, but without one the UN loses respect from all. We must remember though, UN peace keepers are not police force and are powerless to enforce a countries rule of law. This is why we cringe when UN peace keepers do nothing to stop criminal activity, but it's because we don't realize they can't do a thing about it.


Very good point. At least, though, someone should stop the UN peacekeepers' criminal activity.


As well as US, Israel, etc criminal activity. How do we do that?


Yes, all that. And your question is also my question. How do we do that?

I'm afraid we may depend too much on singular leaders to arise, and then we follow. The Rev. Martin Luther King Jr. syndrome. Given a powerful leader, we follow.

I think Obama had a little of that going. The problem is, he really wasn't a leader, but we followed anyway. Maybe there's a vacuum, a lack of leaders. The system is onto it, of course, and seeks to stomp out progressive leaders. In the old days they were simply assassinated.

On our own, what can we do? I don't think it works without those powerful leaders, which is not encouraging, but for the moment that's what I'm thinking. At best, on our own, we try to cling to what we have. To go anywhere different takes leadership.


Today's idle thought from the espresso philosopher. What I need is another cup, about now...

so horrifying! These terrible people need to be punished for their crimes!

How do people commit these horrible acts against children? They should be executed!