Peek-a-Boo, I See You—with my X-ray vision scanner I see ALL of you, heh, heh

Imagine that the government, or private industry, could just stare through your clothing with X-ray vision as you head towards Safeway. That day may be here. 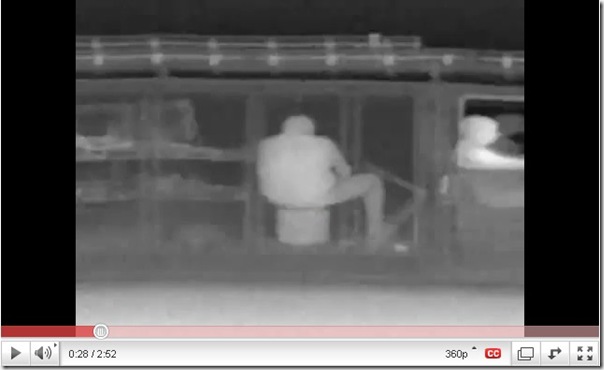 It’s understandable if someone is upset with the airport scanners that see through clothing. For some, it’s the embarrassment of having others stare at their naked bodies, perhaps not trusting that the face is supposed to be obscured. For others, it’s a civil rights issue, forcing a warrantless search on a person simply because they want to travel to another island. Whatever the reason, there’s no doubt that these machines are more or less despised by many.

And it’s worse, I’m sure, if the persons peering through your undies are your neighbors, standing right next to the machine, as has been reported by a passenger returning from Kauai (see: Lawsuit seeks to end TSA use of full body scanners such as the one installed at Lihue Airport, 8/6/2010).

Have you seen those Google trucks driving through neighborhoods, snapping pictures of homes, storefronts, pedestrians, dead bodies, or whatever happens to be on the street at the moment? Imagine now a medium-sized white truck that can do more than snap street photos—it has X-ray vision similar to those airport scanners.

Check out the video above, and an article on the vans here. Unlike the airport scanners which you could object to (and instead possibly receive an intrusive full-body pat-down), you can’t say much as one of these unmarked  backscatter x-ray vans rolls past you on the street. We have no control over what the operator is looking at. Moreover, as technology improves, the images can be expected to become more detailed, not less. The claim that the images aren’t as clear as the airport machines produce is not very comforting.

Here is an issue that all sides of the political spectrum might unite on. Even gun-toting 2nd Amendment lovers won’t enjoy being stopped by police because their concealed weapons are no longer concealed. Lefty civil liberties advocates have an obvious case here. Presumably, the trucks don’t have a hot line to federal court to get warrants as they roll down a street searching, peering, spying, intruding. Nor is the idea of being subjected to radiation very appealing.

I can see a market developing for lead-lined underwear. Except that why would anyone want that unless… unless they were a terrorist (in government logic)?

That backscatter van is scary, kinda like a futurist movie where the US Constitution is trashed and Government and Large Corporations run the country. OMG it's here now!!