The swamp that feeds the river in Chinatown, and a vision of cleaning it up

Just after I arrived, a man took off his shirt and dove into the river for a swim. There are rings along the stone wall that can be used to climb out, but I was wondering why someone would swim in that water. Upstream all kinds of crap ends up in the river, and it probably has leptospirosis as well. As we will see, the State of Hawaii has chosen to dump the toxic runoff from the H-1 into Nuuanu Stream, which is where all that river water comes from.

Later that evening two more men yelled “Banzai!” then jumped from the bridge into the water. It was after dark, but neither the police nor anyone around seemed too concerned.

Maybe we should all be concerned about how Honolulu maintains its rivers.

There’s no question that using the stream as a storm sewer, dumping water off the roadways into it instead of into a proper drainage system, continues to pollute the river. Automobile traffic has increasingly polluted the stream and river.  Here’s a study of Cu, Pb and Zn contamination dated 2003.

I need to say before you read on that I don’t know where the discharge in all the pipes underneath the roadway originates. That would be a subject for future research. I do know where they dump that water, though—into the same stream that those guys were swimming in.

We all know that automobile traffic since the 2003 study was published has become much worse, so it’s reasonable to expect that the toxic metal pollution has also become worse. 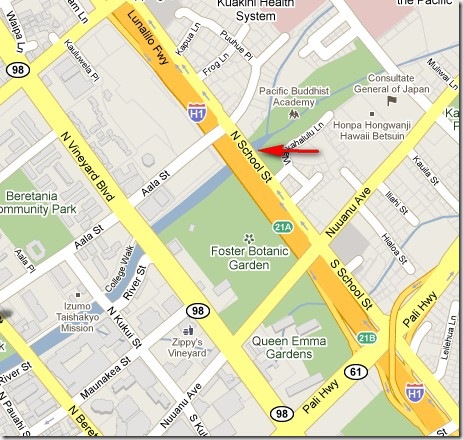 This sign identifies the garden, but just try and find an entrance. Hint: to the right of the sign is a small break in the hedge that you can squeeze through. It’s clear that our city doesn’t really want us to go in right there. If you drive, Nuuanu Shopping Plaza is nearby, or there is some parking at the garden entrance on Kuakini. 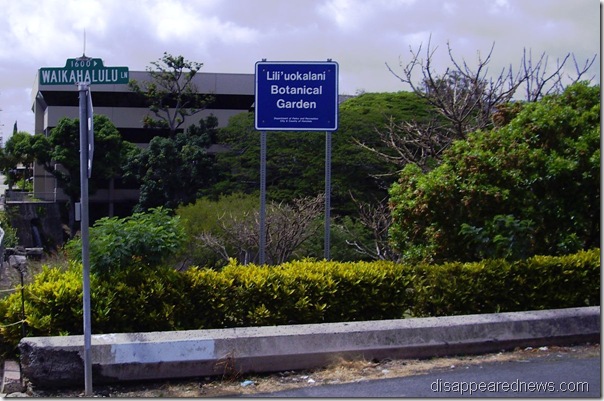 Because there’s no parking on this side, the garden is usually almost deserted. There’s lots of grass to play on, and partway towards Kuakini St. there’s even a waterfall. There are restroom facilities. 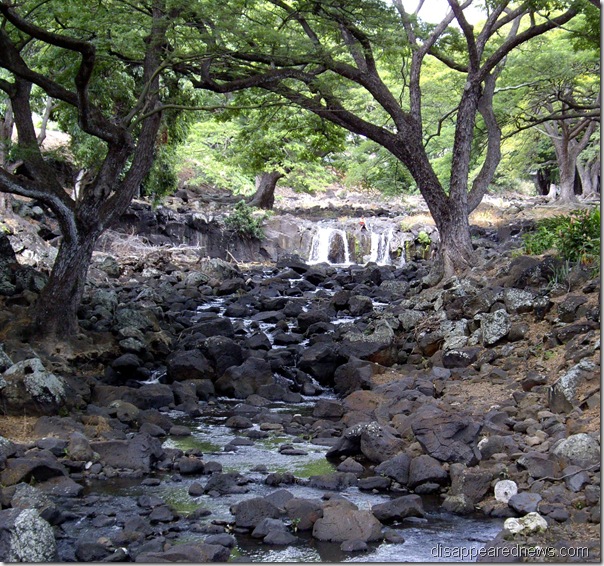 If you don’t mind the possibility that the water has leptospirosis, you can even walk out to the center of the waterfall, as this person has done.

Facimg the other direction, under School Street and the H-1 overpass, there’s a different scene entirely. 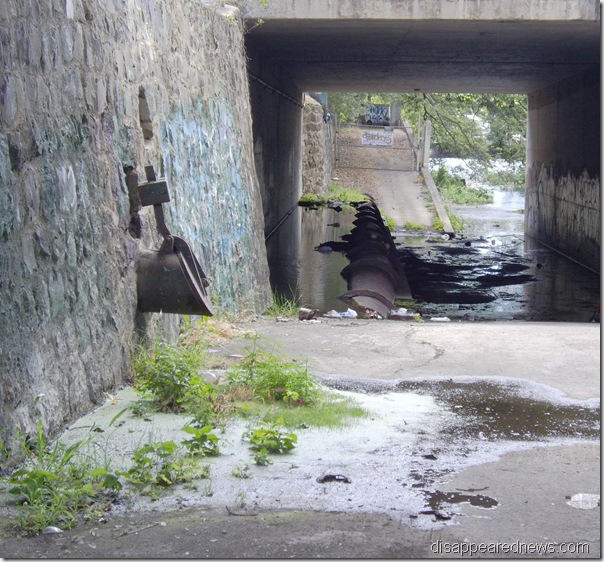 In the center of this picture, where the tunnel goes under the H-1, is an exposed (above-ground) pipe of some kind. To the left of the pipe is an almost stagnant pond of water discharged from places under the highway. There’s algae, garbage, and who knows what in it. It had rained on Sunday, so there was still a trickle of water flowing in. If you’re looking for a place to grow mosquitoes, this is a great spot.

At the left is a large weighted pipe cover. I imagine that when the water builds up in the pipes, the valve opens—and dumps the discharge into the river. The cover is probably to keep rats in or out. I don’t know much about sewer pipe covers, but I know a little about rats.

Let’s examine the swamp a bit more closely. I modified the brightness of the picture (click any of them for larger) so it’s easier to see. Actually, it’s quite dark under there. The thingies in the foreground are not fish. I don’t really want to know what they are. 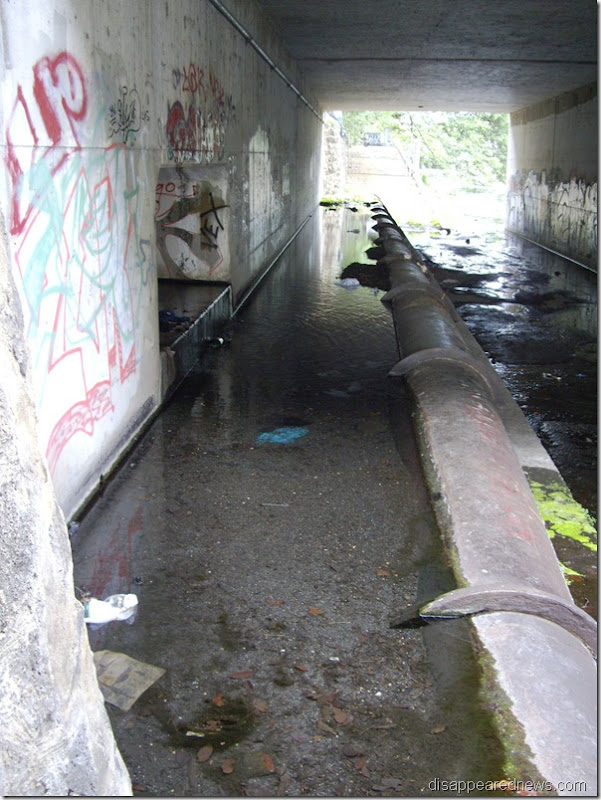 When it rains and more runoff is discharged into this swamp, of course it dumps into the stream.

There’s a kind of waterfall at the far bank, across the stream: 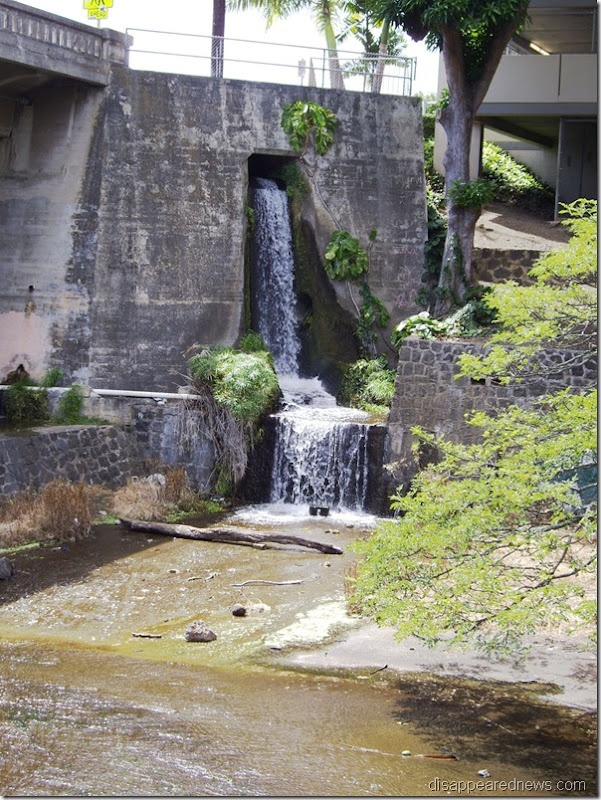 This comes out from under School Street. It could be a stream of some kind, it’s pretty strong. Or a storm sewer. It’s at about that level. In any case, it directly feeds into the river. The walls nearby have holes with pipes in them that look like runoff drains of some kind. Instead of discharging into a storm sewer, they discharge into the stream.

And yes, there are signs that people live down there. Which means, let me put it bluntly, they might be using the stream as their handy bathroom (the garden does have restroom facilities).

Urban rivers can be cleaned up. We lived in Japan when the Kanda River was restored to health. Not only did fish return to the river, but while we lived there an old tradition was revived after having been lost for who knows how long—a kabuki actor commissioned a string of boats to travel down the river announcing a new stage name that he had just ascended to.

Here’s a paper on the Kanda River, including what the future may still hold for it:

Biodiversity and New Urbanism in Tokyo: The Role of the Kanda River (undated, but probably 5/2010).

Restoring healthy rivers is central to contemporary efforts to bring biodiversity to cities. Urban rivers connect the future of global cities with their history and culture. Rescuing rivers from concrete burial and pollution supports a variety of insects, fish, reptiles, birds, and mammals, while creating attractive new public spaces in crowded and densely built cities.

Wouldn’t it be great to not only clean up Chinatown’s river, but maybe one day stock it with fish, or hold events on the water?

This is an excellent story. Cleaning up this "River" would do a world of good for Chinatown and Honolulu. Please see if you can sell it to The Weekly and make sure the photos and maps are part of the deal.

I have looked at this river for almost 20 years and I never knew where it came from. Keep it up and maybe in the future people won't be taking thei life in their hands if they jump in.

How about peddle boats on the river like in San Antonio?


Peddle boats sound like a great idea. It could probably be done even before the river is completely cleaned up.


While we spend millions of dollars every year on advertising for tourist on the mainland we have lost opportunities for return visits by not keeping this island clean. The clean up of Nuuanu Stream would be a great start to make China Town a more welcoming area for everyone.