Chinatown fun, food and input on Saturday August 21, come on over 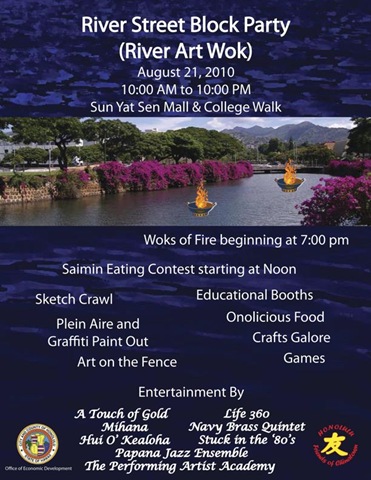 I've been complaining about those trellis posts in Chinatown, so I must also report that the community has been getting together to plan a vision for their neighborhood.

It’s a coordinated grassroots effort supported by the Acting Mayor's Office of Economic Development and co-sponsored by the Friends of Chinatown and the City and County of Honolulu.

The Friends are working with District 1 Community Police and the Chinatown Weed and Seed's Citizens Patrol, local corporations and businesses.

You can come over to Chinatown for a day of fun and also provide your input to the Friends of Chinatown.

The day-long block party will run along River Street, on the Sun Yat-sen and College Walk Malls and portions of Kukui Street. Starting at 10:45 free sketchpads will be given away while supplies last.

Go early for the lion dance (10:15). Come late for the 7 p.m. torch lighting and Woks of Fire, followed by dancing under the stars. Don’t forget to bring a camera.

If you click on the image, you should be able to get a larger version to stick up someplace. Pass it on. Saturday, August 21, food, fun, art and input in Chinatown.