Burglary? There’s an app for that

Should Hawaii’s lawmakers be checking that website that KITV discovered will identify the personal information of a car owner just by standing in a parking lot and entering the license plate, as they did on TV?

It’s not just that website, of course. Many people are very cavalier in their use of social media that reveals their location or habits to anyone and everyone. Unlike the KITV site, most revelations are voluntary. In other words, people advertise to the world when they won’t be home.

Running away from home

Burt Lum, @Bytemarks, is one connected guy. If you look at his tweets, he seems to have all his apps tweeting for him (Twitter reveals what app posted the tweet).

This morning I found a message from Burt in my tweetstream. Curious, I clicked on the link to see what this RunKeeper thing is. The fact that it has a capitol letter in the middle of its name hints that it is probably an app. An app is probably a program that runs on one’s iPhone.  The whole iPhone thing is just so mind-blowing, why not start off my day having my mind blown.

And indeed it is a very interesting app. I guess it runs when you run. The iPhone includes GPS and an accelerometer. It’s perfect for this task.

I used to use a digital pedometer that not only timed my run and let me know my distance, but figured out how many calories I burned and provided some other info. I thought it was high tech at the time. It’s nothing at all compared to RunKeeper. Nothing. Medieval technology, a tool of a past era..

This app maps where Burt has been, how steep he has climbed, and more. It leaves my high-tech pedometer in the dust.

And it tells me where Burt is.  You know where I’m going with this.

How the mayor gets robbed

The next time you visit Whole Foods in Kahala Mall, you may see Foursquare  clings on their display windows. The idea of this is that app addicts can “check in” and even become “mayor” of the place if you check in enough. To become mayor of Whole Foods in Kahala means, of course, that you are there a lot, not at your home.

You know where I’m going with this.

Particularly for a Kahala store, this seems slightly risky. Whether the risk is real or not will be hard to tell, because few people will report to the cops (or to the newspaper) that they tweeted or otherwise gave out information that facilitated the burglary of their own trendy home.

At least they still have their iPhone, even if all the laptops and desktops have been stolen.

Here’s a video for you, if you think this is far-fetched.

KITV revealed the existence of a website that lets smartphone users identify who goes with a certain license plate. The reporter wisely didn’t give out the URL of the website. On the other hand, this leaves those concerned about privacy risks and identity theft no way to see if our personal information is being revealed by the website in order to take corrective action.

Some commenters to my post indicated that they searched but haven’t been able to find the website. I tried also, and have not found it yet. I really want to know if my car is listed.

The advantage that careless use of social media provide to burglars shouldn’t be minimized. Nor is the concern anything new:

In a report called "The Digital Criminal," [British-based] Legal & General said people used social media sites to connect with people who were essentially strangers, which could provide potential thieves with vital, personal information.

Reformed burglar Michael Fraser, who appears in BBC's "Beat The Burglar" series and helped Legal & General prepare the report, said this kind of information was being used by professional burglars to establish a list of targets.

As well as information about trips away, people were posting party photos showing the interiors of homes and also chatting about their cool new purchases and presents.

"I call it "Internet shopping for burglars." It is incredibly easy to use social networking sites to target people, and then scope out more information on their actual home ... all from the comfort of the sofa," said Fraser in a statement.

"There is absolutely no doubt in my mind that burglars are using social networks to develop relationships with people to identify likely targets."   [Reuters, Burglars using Facebook, Twitter to find targets-report, 8/28/2009]

Finally, let me close with “yes, there’s an app for that.” At least there was. The site pictured below has shut down their helpful service. 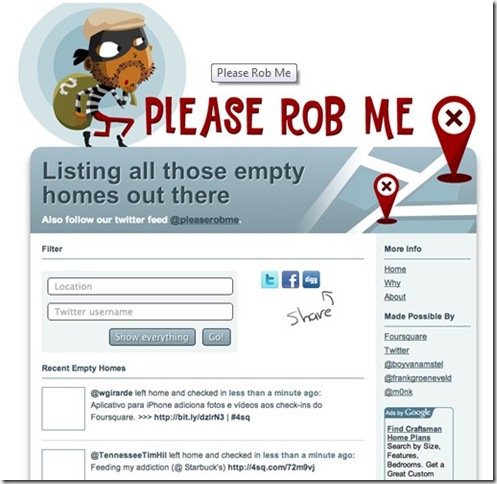 While it is a personal choice whether to tweet a planned vacation for the family to Vegas next week, the website providing license plate data that KITV uncovered is out of our individual control. Without revealing the URL of the site publicly, I hope that Hawaii’s lawmakers and law enforcement will look into the matter and see if everything is being done to protect us from the potential damage that it may cause, and to learn how exactly information that is supposed to be withheld from the public so easily becomes available.

Wha? "Without revealing the URL of the site publicly?" I thought you were a zealot for open government.

Law enforcement can (and does) sneak around like that, but if the Lege does anything (substantive) about it, they will have to name names, or in this matter, the URL.


This isn't an open government issue. The website is probably not run by the government.

As long as it poses a danger to battered women (as per KITV's program on it), it would be irresponsible to publish the URL.


Let me explain how this IS an open government issue.

Assume that the Lege decides to act, but does not wish to reveal the URL. How would they proceed? Couldn't write a law banning a specific site without revealing the URL.

Okay, maybe they would write a law banning all such sites? That would be all but unenforceable at the state level (except in the unlikely event that the site is operated and/or hosted within the state). But, for the sake of argument, let us say the site IS headquartered in Hawaii. To prosecute the offense there would need to be a public trial. The URL would certainly have to be named when the information is presented to the grand jury, and if they chose to indict the URL would become public record. If it were not revealed, the prosecution would be unable to prove that the law had been violated. Or would you prefer to allow the government to prosecute on the basis of secret evidence? Gitmo, much?