An AP story is making its way around the world, reviving the as-yet unresolved issue of human rights violations aboard ships in Hawaii's longlines fishing fleet.

The story reports that a complaint has just been filed with the Inter-American Human Rights Commission.

Simultaneously, an agency of the Hawaii State government has denied without public hearing a petition filed by a Native Hawaiian waterman challenging the state's issuance of fishing licences to foreigners who cannot land in Hawaii. The denial will trigger an immediate court action. 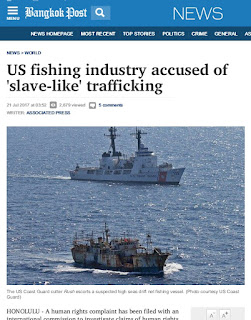 The following snip is from an article in the Bangkok Post:

Turtle Island Restoration Network told The Associated Press on Wednesday that they filed the complaint last week with the Inter-American Human Rights Commission. The filing asks the panel to determine the responsibility of the US for human rights abuses against foreign workers in Hawaii's longline fishing fleet.

An Associated Press investigation into the seafood industry revealed that hundreds of men are confined to Hawaii boats that operate due to a federal loophole that exempts the foreign fishermen from most basic labour protections.

Many come from impoverished Southeast Asian and Pacific nations to take the jobs, which can pay as little as 70 cents an hour.

The fleet catches $110 million worth of luxury seafood annually.

Today attorney Lance Collins issued a press release regarding the dismissal of a petition filed with the Board of Land and Natural Resources on April 12 (see below). Not only did the BLNR delay responding for three months, but they also issued their denial without holding the customary public hearing.

Collins announced that the denial will be appealed immediately to the Environmental Court on Maui.

It is fair to say that the issue of human rights violations uncovered by an AP investigation published September 8, 2016 will stay in the public eye worldwide until the state government takes effective action to end the abuses. At the root of the problem is the illegal issuance of fishing licences by the state to foreign fishermen who are not allowed to set foot in the state.

On April 12, 2017, Malama Chun, a Native Hawaiian waterman, who fishes, filed a petition with the state Board of Land and Natural Resources challenging DLNR's Division of Aquatic Resources practice of issuing licenses to foreign fisherman who have been refused permission to land in Hawai'i by U.S. authorities and have been ordered deported.

State law restricts the issuance of commercial fishing licenses to persons “lawfully admitted to the United States” Foreign fishermen working in the longline fishing industry are refused permission to land in the United States by Immigration and Customs Enforcement and are also ordered deported. However, using a loophole, they authorize the fisherman's boat captain to hold the fisherman's passport and the deportation order and allow the boat captain to determine when the deportation is to occur. To enforce the deportation order, the piers at which the fishing boats dock are heavily militarized and access is restricted.

Chun said, “The members of the BLNR must have been too ashamed to make their decision at a public meeting. The situation is bad for these fishermen and its bad for Hawaii's people. And I know in their hearts they know its wrong which is why they didn't give us a public hearing before deciding.”

Chun's attorney, Lance D. Collins, added: “The Board's claim that Mr. Chun has no interest in their illegal issuance of commercial marine licenses is not only erroneous but absurd. We will be appealing this decision to the Environmental Court immediately.”