Hawaii should fear a "knapsack" attack more than a N. Korean ICBM


It's July 4th. While looking forward to today's hotdogs and tonight's firework celebration, at the same time our Twitter feed shouts out ominous reports of North Korea's latest test firing of an ICBM: 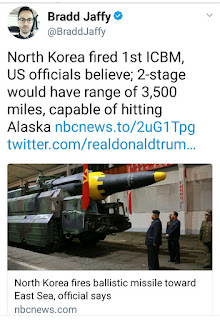 In Hawaii we probably should be worrying about our vulnerability as a future missile target. We should, however, also be concerned about a more immediate potential threat: conventional targeting of tourist or military facilities in conventional terror attack.

Do you think it couldn't happen here?

Watch the sky tonight, particularly if you live on the upper floor of a condo or anyplace high over the city. I'll bet there will be plenty of illegal aerials, as usual.

Even though they have long been outlawed there seems to be no way to stop them.

Clearly, it's pretty easy to bring them in. Your neighbor may be buying them and then shooting them off each year with impunity.

We can't keep them out it seems.

This inability to keep out explosives could be a more immediate threat than expecting a N. Korean atomic bomb to be launched in our direction one day.

Tourism clearly is a common terrorist target, as we all too often read in the news. Terrorism is aimed now at innocent gatherings of civilians and at places popular with tourists. ISIS leader Al-Baghdadi declared a jihad against tourism. It works very well for the evildoers, who seek the media attention the attacks bring even more than the death toll they can achieve.

Professor Johan Galtung named what I am describing as "knapsack" attacks. That is, someone brings the material into Honolulu and then uses it to blow something up.

The lesson from the repetitive display of illegal fireworks is that this may be very easy to do.

The targets might be malls, PXs, Waikiki beaches or hotels, or Chinatown nightclubs or gatherings.

Any such incident would likely have a lasting impact on tourism, the driver of the state's economy.

A "knapsack" attack is very low-tech and doesn't risk nuclear counter-attack. Why anyone would concentrate on developing and then dropping a missile on us escapes me, to tell the truth.

What to do about this? I suggest we begin talking and not just waiting for it to befall us.

When 6,000+ people are lined up between NBC Arena and Exhibition Hall for a concert AND the Exhibition Hall is packed and folks are squeezing between the concert goers to get in and out through glass doors. That fear has crossed my mind.