It will be Hawaii, not Mar-a-Lago, that is at risk if Trump provokes North Korea 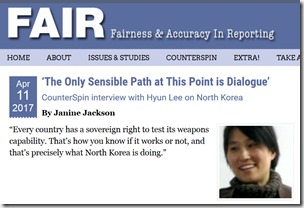 Update: The transcript of the Counterspin interview with Hyun Lee on North Korea is now posted. Read it here.

For an expert analysis including the “disappeared” history that never makes it into the mainstream news, tune in to this week’s episode of Counterpoint. Download the mp3 file linked from this page and skip ahead to about the 4:30 point for the interview. At this writing, no transcript has yet been posted on the fair.org transcript page, but there should be one in a few days.

Understanding of the US relationship with North Korea will not come from Trump, our own dear leader. To understand the tense and perhaps fragile situation will take research beyond his tweets and press statements. Nor has the mainstream press been at all reliable, most habitually dismissing N. Korean leadership as bumbling clowns with nuclear weapons.

The mainstream media seems to love Trump’s “presidential” act of bombing that Syrian air field. They love it. As a distraction from the ongoing investigations into Russian involvement in the election, it’s been a winner.

For the moment, anyway, the tide of media approval has swamped the Russian thing totally, as may have been intended. 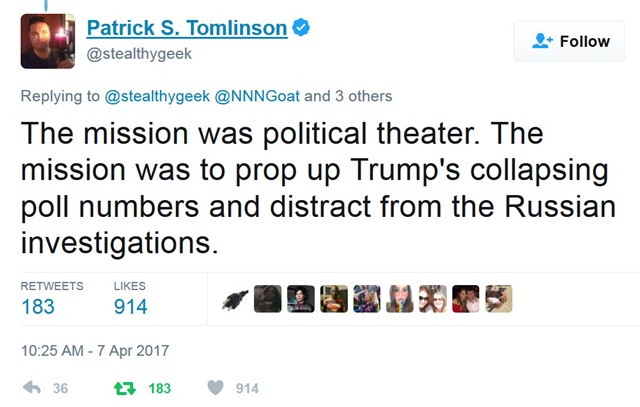 The investigations haven’t halted, of course, and could bob to the surface any time soon. In that case, since Trump enjoys “winning,” there has been speculation in the Twitterverse that he could try for an encore performance by provoking North Korea militarily.

If he does that, as I tweeted on Thursday, Hawaii better watch out:

The path of an ICBM would be shorter to Hawaii and opportunities to intercept it fewer. Plus, the islands are home to a vast military presence, including the Pacific Command.

Of course, the United States could then blow N. Korea off the map.

Kim Jong Un would have to be crazy to attack Hawaii. Right?  Right?? 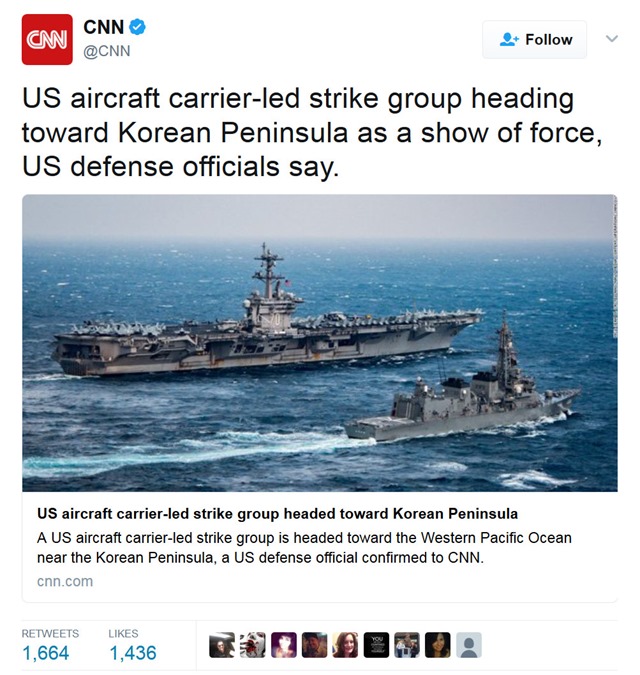 That Trump may have N. Korea in his crosshairs is a hot topic on Twitter. He seems to be preparing. Preparing something, we don’t know what, since his actions appear to be based more on whim than on policy. 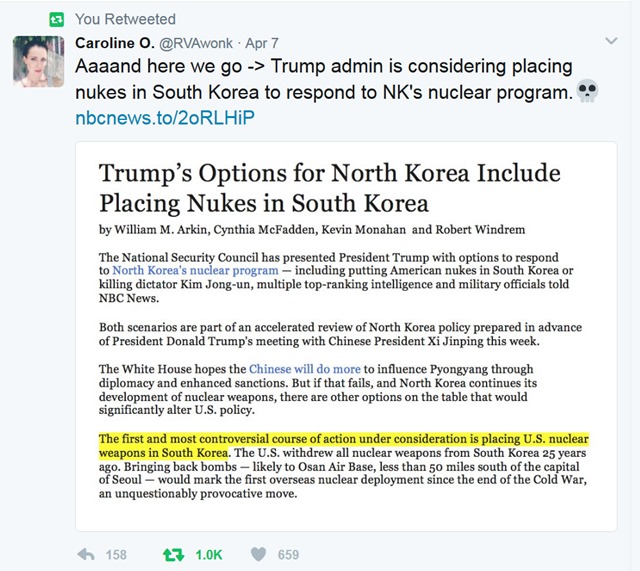 None of this is secret. The tweets have thousands of re-tweets.

Also, and this is a new twist I think in American politics, Trump stands to profit from the military adventures he instigates. The bombing of the Syrian airfield was ineffective—planes took off from it the very next day. But the 60 or so missiles fired drove up Raytheon stock, and Trump invests in Raytheon stock. 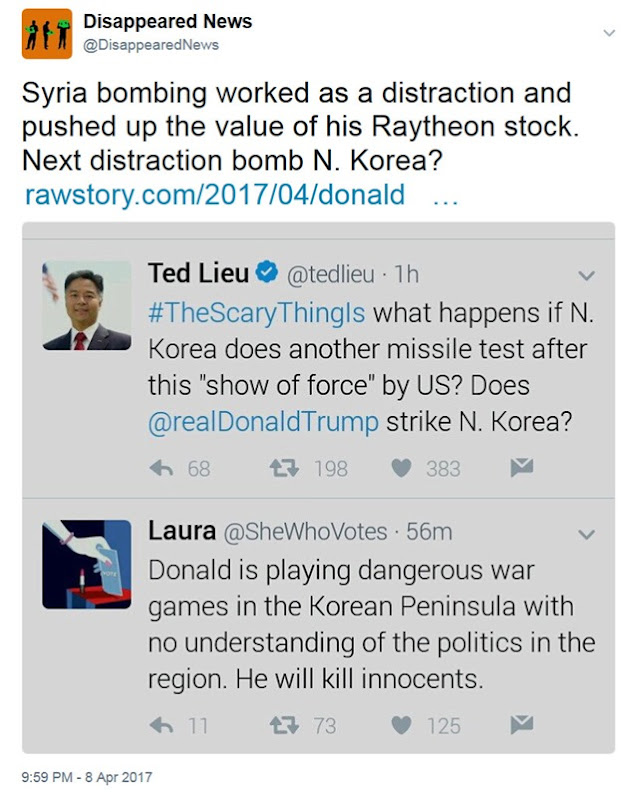 There’s nothing funny about this, but there was an article in The Onion that rang too true to be amusing: 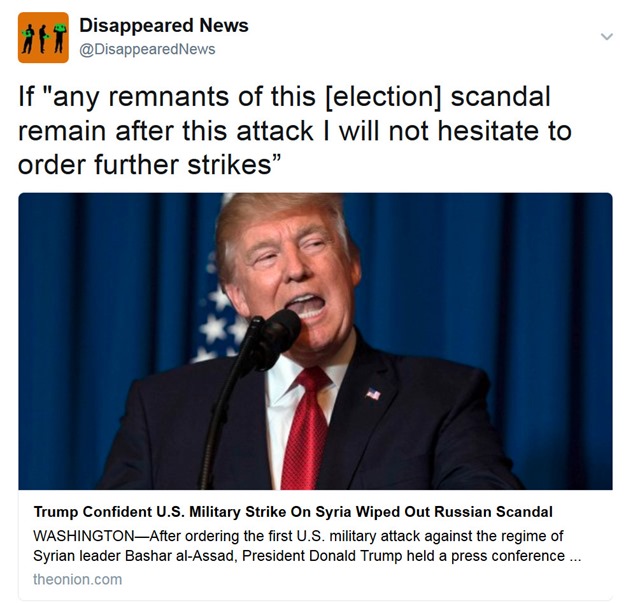 …President Donald Trump held a press conference Friday to express his full confidence that the airstrike had completely wiped out the lingering Russian scandal. “Based on intelligence we have received over the past several hours, the attack on the al-Shayrat air base in Homs has successfully eliminated all discussions and allegations about my administration’s ties to the Russian government,” said Trump.” 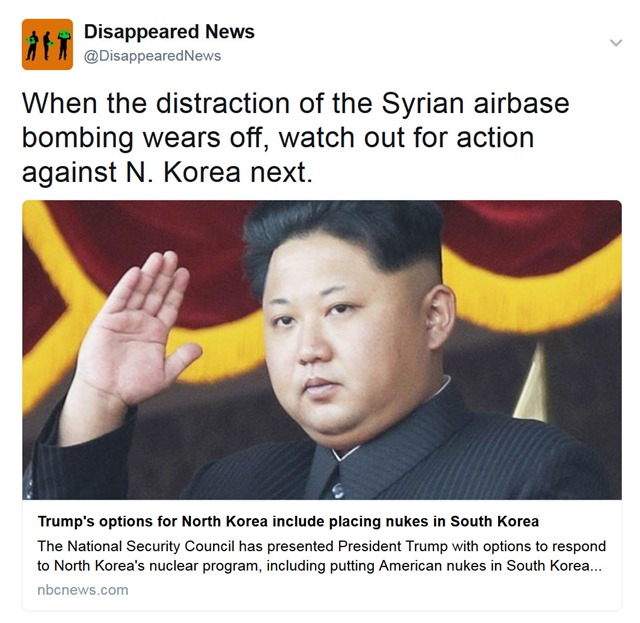 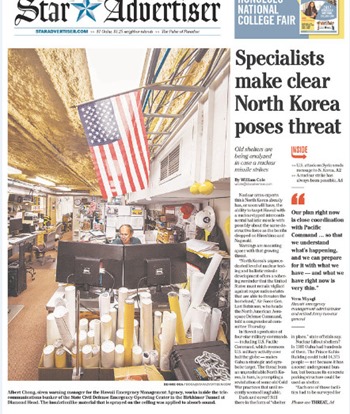 Today the threat went mainstream, at least in the Honolulu newspaper. The Star-Advertiser gave almost its entire front page to a story about the threat.

In Hawaii a profusion of four-star military commands — including U.S. Pacific Command, which oversees U.S. military activity over half the globe — makes Oahu a strategic and symbolic target. The threat from an unpredictable North Korea, in turn, is prompting a revisitation of some old Cold War practices that until recently seemed laughable.

The well-researched story by reporter William Cole notes that once we were prepared (as best as one could be, I suppose), but no more:

Nuclear fallout shelters? In 1981 Oahu had hundreds of them. The Prince Kuhio Building could hold 14,375 people — not because it has a secret underground bunker, but because its concrete parking structure could be used as shelter.

“Each one of those facilities had to be surveyed for how much concrete density (was present),” said Toby Clairmont, executive officer of the Hawaii Emergency Management Agency, the successor to Civil Defense. “And they had to be equipped, so they put medical kits in them, food, sanitary kits, all that kind of stuff.”

As time went on, funding for those provisions stopped, and the stocks were disposed of because they became too old, Clairmont said. In the majority of cases, existing fallout shelter markings are out of date and no longer applicable.

It’s scary for many people to realize that Donald Trump really is president.” Some wake up in very real fear of deportation or of losing their health insurance and then their health. For us in Hawaii, we have Trump’s intentions toward North Korea to worry about as well. What he does may well have consequences for us.

What to do about it? That discussion should start immediately at all levels of our government.