“
The tubby tyrant has threatened to use his ICBM to reduce the US to ash as the two countries stand on the edge of nuclear war.

US president Donald Trump has vowed to deal with Kim Jong-un and could launch military strikes over his nuclear weapon programme.

One of his nukes, the long-range ICBM, will be capable of reaching the US once it is fully operational, with Hawaii believed to be in his targets due to it being the closest state.—article in UK Daily Star
”

Downtown Honolulu would also be turned into a crater with buildings in a mile radius of the blast being wiped out.

I was a bit tense last week, but not now. Why? If a North Korean nuke should hit Honolulu, I wouldn’t have anything further to worry about, would I? The Daily Star article gives me reassurance of that.

Unless it misses its target, the “tubby tyrant’s” bomb is headed, according to their map, directly for the rooftop where I live: 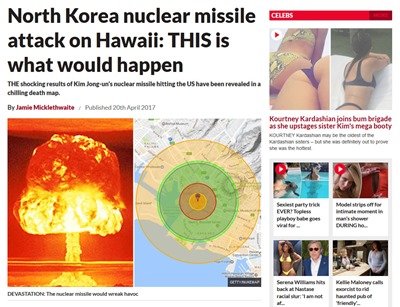 The presence of Kourtney Kardashian’s butt next to the map didn’t distract me from noticing exactly where the paper placed that pin on the map.
Our condo has underground parking that could possibly be a suitable fallout shelter if stocked with food, etc., but if Kim’s nuke comes down our chimney, no further worries about that, of course.

The Daily Star ran at least three articles on the subject, here, here and here. The story has legs, though, which might possibly impact tourism if potential visitors take it to heart. From one of several dozen Vietnamese newspapers that picked it up:

Hawaii is the most vulnerable target because it is located near the North.

The busy streets in Honolulu will turn into rubble while high-rise buildings collapse before the impact of shock waves.

Another here. No Kardashian pics, though.

Well, I've always thought I'd prefer to be at ground zero than to survive a nuclear attack, so I'm not going to worry either!