Enjoy a great meal for really little at group fundraiser in town May 3.

I have found a way to transform these political fundraisers held during the legislative session into a real social benefit. Please read or skim through this until the end. I’m going to reveal a secret.

Yesterday we learned that the price of a Hawaii Speaker of the House would be $1,000 for an evening get-together during session. And although I’ve been comparing our legislature to a medieval Japanese feudal system, there’s no need to carefully wrap your contribution and bow low as it is pushed across the table. Well, you could still bow low, that’s fine.

Again, this is not unethical under the ethics laws (because lawmakers won’t pass bills that would make it illegal). In the normal usage of the word “ethics” it is hard to justify the most powerful person in the House soliciting money contributions while matters affecting the contributor are still pending before the legislature.

Today I learned of other House members holding a fundraiser during session. This time they are ganging up together, and the suggested contribution mentioned is a more affordable $100. And no free parking. 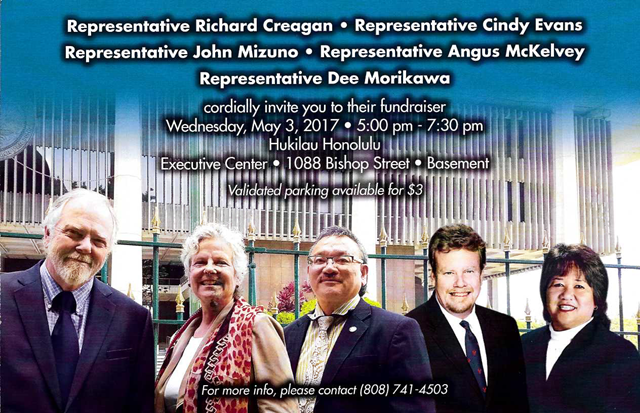 Rep Creagan and Rep. Evans hail from the Big Island. It’s not too likely that many of his constituents can afford the air fare and hotel charge to come to Oahu for this shindig. Rep. McKelvery is from Maui. Rep. Morikawa is from Kauai County. Same for them.

Lobbyists and corporate interests, on the other hand, will be able to walk over after work. So you tell me who this fundraiser is designed to attract?

It oughta be illegal but its not.

Help these legislators feed the hungry

Now, I wouldn’t dare suggest this, but the food at the Executive Center is not terrible, and anyone in town that day could probably indulge for very little. Even for a buck. There’s no minimum charge for admission.

In these times of #Resistance I dream of someone rounding up, say, 100 people and crashing one of these events. And doing it again for the next, and the next…

It could also be a really cheap date. Hobnob with the lobbyists. Find out why they want you to eat GMOs. Or whatever. Finally get to speak with these legislators. Or just enjoy the buffet.

Don’t say you heard that here.