Cayetano’s message to Trump is well timed, but perhaps misplaced in the Washington Post


“
You and I met in 1998 when your Miss Universe
Pageant was held in Honolulu. I recall you
commented on the beauty of Honolulu and how
you felt it was the perfect venue for the pageant.
The rail project plans include seven massive elevated
rail stations 50-60 feet high and the 35 foot high
elevated rail line through the heart of downtown
Honolulu. If built, this will change the beauty and
ambience of the city forever.—former governor Ben Cayetano’s ad in the 4/21/17 Washington Post
”

Former Hawaii governor Cayetano’s message in his Friday full-page ad in the Washington Post is clear, and he may have the right psychological approach for President Trump. He’s asking Trump to cut off federal funding for the Honolulu rail project (see ad, below).

Maybe someone will actually show it to Trump.

Not only is the psychology tuned to Trump’s thinking, the timing could not be better. No doubt Trump is pissed at Hawaii for fouling up his Muslim Ban executive order. Cayetano offers him a way to apply the screws.

It would perhaps be more effective, though, if instead of the Washington Post, the venue were a commercial on Fox and Friends. That’s what HBO’s John Oliver did.

Oliver ran a series of commercials on a program that Trump is known to watch. 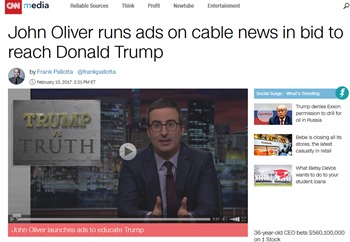 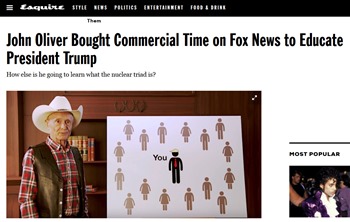 Of course, this is not a serious suggestion. It would be not only Trump who views the commercial but a sizeable chunk of the TV audience that Hawaii needs to attract as tourists.

It’s much less likely that potential tourists will be reading the Washington Post ad. 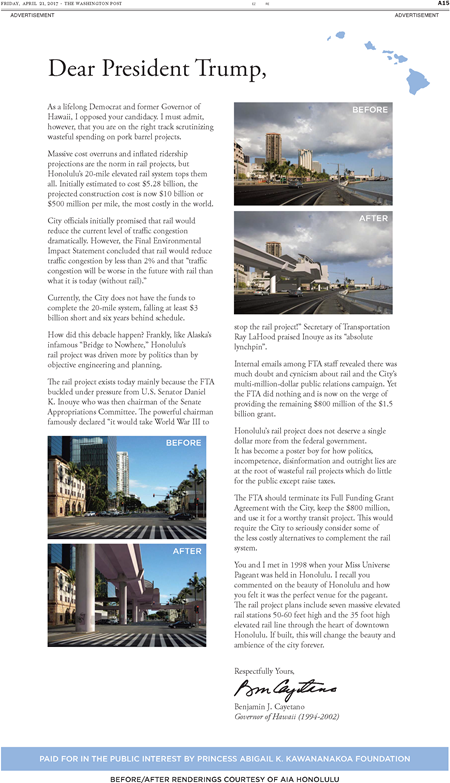