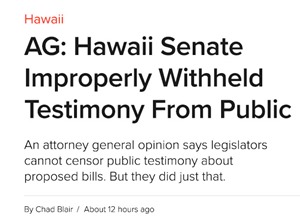 A Hawaii Attorney General opinion posted along with an article on April 11 by Civil Beat should not be the last word on this issue. In fact, there is good reason to question the opinion based on its omission of critical case law on the subject.

Such protections are covered by the petition clause of the First Amendment of the U.S. and Hawaii constitutions, Deputy Attorney General Robyn Chun wrote to state Sen. Breene Harimoto on March 29.

Harimoto requested the opinion after learning that the written testimony of a woman working for A Place for Women in Waipio was withheld from lawmakers and the public. The testimony contained personal information about another testifier who was critical of the organization.

This would not be the first time testimony has “disappeared” after submission to the Legislature. See below for more on this.

Isn’t an AG opinion the last word on a subject?

Definitely not. The AG (or his deputies) regularly lose in court. It is reasonable to question opinions and even to question whether there might be some bias. We all have biases. This opinion may also—it may have a bias based on religious beliefs, given the particular subject matter.

One never knows, but when an opinion omits pertinent case law, it seems reasonable to question why.

One more snip from the Civil Beat story provides background for this line if inquiry:

At issue is Senate Bill 501, which would require all “limited service” pregnancy centers like the one in Waipio to disclose “the availability of and enrollment information for” reproductive health services.

An earlier version of the bill identified as part of that information abortion services, but the latest version uses the words “pregnancy-related services.”

SB 501 is supported by the Hawaii State Commission on the Status of Women, Planned Parenthood Votes Northwest and Hawaii and the local chapter of the American Congress of Obstetricians and Gynecologists. It is opposed by religious organizations such as the Hawaii Family Forum, the Roman Catholic Church in the State of Hawaii and Mauka Makai Ministries.

Google reveals that Schwab is a frequently cited case when legislative procedures are challenged, so its omission is curious.

Because the legislature is empowered by Section 12 to determine the rules of its proceedings, the court has declined to investigate possible violations of legislative rules. In general, the judiciary's role in supervising legislative activity is limited to seeing that such activity does not violate any constitutional provisions. Therefore, it will not "interfere with the conduct of legislative affairs in absence of a constitutional mandate to do so, or unless the procedure or result constitutes a deprivation of constitutionally guaranteed rights" (Schwab v. Ariyoshi, 1977).

At issue here, then, is whether there is a constitutionally guaranteed right that testimony submitted to a committee chair or a Senator must be distributed to other members or all members. It’s just not there.

Nor is there anything prohibiting the Legislature from changing, failing to follow, or even violating its own rules. They do so fairly regularly, in each and every session. Advocates may grouse about it, but it’s not illegal.

We need to look at one more case that was recommended to me, though:

Minn. Bd. Commun. for Colleges v. Knight, 465 U.S. 271, 281 (1984). In this case, the U.S. Supreme Court rejected the implication by the AG's recent opinion that the "right to petition" the government under the First Amendment can control legislative procedure.

The Constitution does not grant to members of the public generally a right to be heard by public bodies making decisions of policy... To recognize a constitutional right to participate directly in government policymaking would work a revolution in existing government practices.

There’s nothing to prevent any citizen (or anyone else, for that matter) from emailing all the Senators on a committee in order to be heard, as an example. The person whose testimony was “censored” could do that, and perhaps did. So there would be no infringement, as the AG suggests, of a person’s "right to petition" the government under the First Amendment. Email, fax, hand over a letter, whatever—petition away.

So what “bias” may be at play?

It wouldn’t be unusual for a person’s personal or religious beliefs to influence professional views on a subject intentionally or unintentionally. I can only speculate that perhaps this could be why the opinion fell as it did.

SB100 has been strongly opposed by the religious right. It seems that the Senate intends to withhold the personal information revealed in that testimony in order to shield a survivor from further victimization. Others appear to want the opposite. 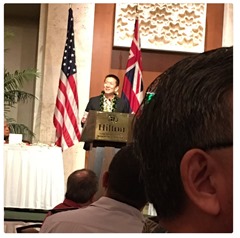 And here is a photo, posted in a tweet by prolific tweeter Senator Gilbert Keith-Agaran dated April 13 (two days after the Civil Beat article) of AG Doug Chin welcoming people to the Hawaii Prayer Breakfast.
There’s no implication of wrongdoing in suggesting that a person’s possible beliefs may influence the thoroughness of a professional work product. It happens.

Did it happen here?


Other instances of “censorship” of testimony

At one time I was a frequent testifier at the Legislature, spending far too many days waiting my turn to weigh in on controversial bills. It did happen that my testimony, submitted well before the committee meeting, didn’t make it into the committee’s paper packet that preceded computerization. It also happened rarely that my testimony did not make it into the compiled on-line pdf file after computerization.

Since I always came with a couple of copies of my written testimony I simply gave it to the chair and went over it orally for the rest of the committee.

Sh*t happens. But mostly, the process worked quite well.

A better example of “censorship” was on public display at a Senate hearing conducted in March, 2012, at which Senator Roz Baker, chair of Senate

Commerce and Consumer Affairs Committee, refused to hear oral testimony in opposition to the appointment of HMSA’s chief lobbyist to a position on the board of the Hawaii Health Connector. The entire incident was caught on video and led to a complaint by two organizations (one of which was Kokua Council, of which I was president at the time) about the chair’s conduct.

I wrote at the time (see first link):

On Friday, March 23, Senator Rosalyn Baker strong-armed approval of the nominees through her committee. She didn’t allow testimony from the public waiting in the room to speak until confronted by a member of the audience. And even then, she interrupted those who did come forward to testify against the nominees. Example: she would not let me refer to information in a Star-Advertiser article I brought with me.

The complaint, of course, went nowhere because the Senate can realistically do almost whatever it wants.

Recently I was asked in an email about apparent censorship of testimony submitted properly via the Capitol website. It took me a while to get to the issue, but when I did, I learned that the Capitol website simply forwards testimony to the committee, where presumably a staff member assembles the testimony as in days of yore. The emails to me included the receipts received from the system.

I did not look at the testimony in question—it doesn’t matter whether I would agree with it or not. In my view, the Legislature should, in general, assure that all testimony is properly compiled. I could not learn from the committee staff if testimony was ever deliberately withheld, and one person’s response wouldn’t necessarily be definitive anyway. Perhaps I could have more aggressively pursued the question, but there was no assurance that I could accurately learn the reason for the disappearance of this particular testimony.

That is not to say that “disappeared” testimony isn’t of interest—it is, just that in this single instance I could not form a conclusion. If there is a pattern and practice of omitting testimony, that alone should be of public interest.

Anyone who is concerned about this, please comment below if you also have had testimony “disappear” that you think was unfairly treated.