High bacteria detected in Meadow Gold milk—could it be due to unrefrigerated shipments to Hawaii?


“
Milk sold on Oahu spends at least four days in transit from the Mainland without refrigeration—Honolulu Magazine, 10/2005
”

The Star-Advertiser reported today that high levels of bacteria were discovered in Meadow Gold milk that far exceeded the permissible level. From the article:

How to identify milk processed at Meadow Gold’s Honolulu plant

The website Local Dairies reveals the codes stamped at the top of every milk container that identify the plant where it was processed.

For Meadow Gold’s Honolulu plant, that code is 15-01. Look for it to learn where milk sold as private brands really originates.

The article, on a deep inside page of the newspaper, appeared to accept Meadow Gold’s assertion that the milk is still safe by unquestioningly quoting a spokesman for the company:

“We test our products regularly before, during and after processing to ensure quality, and it’s important to understand that product being sold in stores is not affected,” Schuler said in a statement. “We have not received any consumer complaints.”

Schuler said in a phone interview the milk in the stores is safe to drink, but the high levels of coliform might lead to early spoilage.

Clearly, the company did not detect the high bacteria levels and correct the situation on its own. The Department of Health did, during three inspections.

After the first detection in January, why was the situation not corrected immediately?

Can it be true that instead of its own testing, Meadow Gold instead relies on consumer complaints? Should the newspaper article have left it at that? How would consumers ever be able to detect high bacteria levels?

And why was a cease and desist order issued only on February 27 when high levels of bacteria (“nearly 15 times the maximum permissible”) were detected on January 19? Readers may want to know more. The reporter should have dug deeper.

The article did report that the company can’t identify the source of the contamination. Could it be the milk that is shipped to Hawaii in unrefrigerated containers? 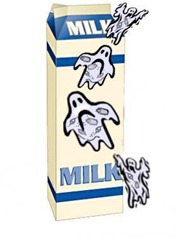 Joan Namkoong was probably the first to report in print way back in 2005 that milk shipped to Hawaii is not refrigerated in transit:

"What's interesting--and a bit alarming--is that Hawaii-bound milk is pasteurized in California before shipment, then placed in insulated (but not refrigerated) containers for shipment to the Islands, according to Chin Lee, dairy extension specialist at the University of Hawaii's College of Tropical Agriculture and Human Resources. Once the milk arrives at Meadow Gold, a minimum of four to five days after pasteurization, it is pasteurized again before it is bottled.

"Hawaii is the only state that allows repasteurization of milk, says Lee, which can pose a food safety issue."

Over to you, Star-Advertiser, for more digging on this issue.

Meanwhile, concerned consumers can look at the stamp at the top of each milk container to learn where it was processed (see box above right).